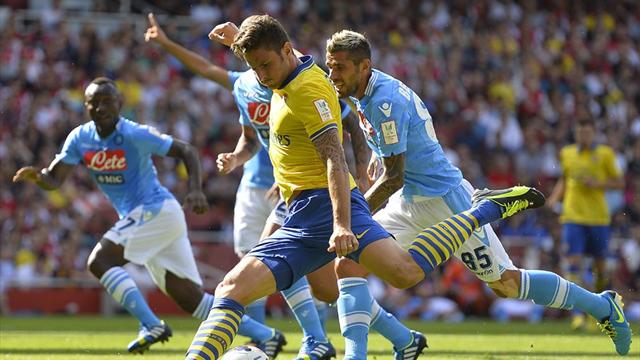 Arsenal manager Arsene Wenger has said the Gunners will travel to Italy looking to win their Group stage match against Napoli, despite knowing that they only need a point to qualify for the knockout stage after their 2-0 win against Marseille at the Emirates last night.

With 12 points safely locked up in the bank Arsenal will move into the last 16 of the Champions League if they do not lose by three or more goals to Napoli in their last Group F match.

When speaking to Sky Sports after the match Wenger said:” We should be fine but it is important that we show the desire in Naples to win the game. We must go with a positive attitude.”

Jack Wilshere was last nights hero with Wenger pleased at his progress adding:” He’s coming back to a good level now and you could feel that he’s started to score the goals as well. I like what I saw tonight.

“I would have liked us to have scored our second goal as quickly as possible but overall we did the job and maybe it was too comfortable for us.

“The positives are that we were strong and we didn’t concede but we must remember that we haven’t finished the job off and we have to do that in Naples.”