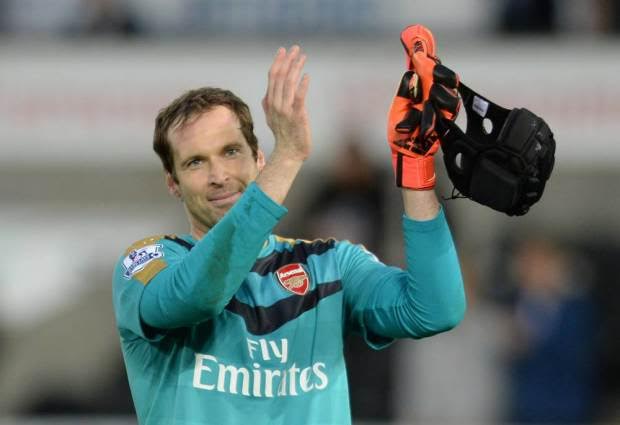 Arsenal summer signing, goalkeeper Petr Cech has revealed that one of the secrets to the success he is having with the high-flying Gunners is because except for Per Mertesacker he speaks to the other defenders in their own native tongues, according to the Daily Mirror.

The 33-year-old former Chelsea shot-stopper grew up in the Czech Republic, in the Western Bohemian town of Pilsen, just 74 kilometres from the German border, so it is no surprise to expect him to be able to speak Czech, Slovak and German.

What is a surprise however is that he is also fluent in French and Spanish, using this skill to make sure Frenchman Laurent Koscielny and Spaniards Hector Bellerin and Nacho Monreal understand the instructions that he shouts to them.

While speaking exclusively to Mirror Football following his record breaking 170th Premier League clean sheet, after the 2-0 over Bournemouth on Monday, Cech let us in to a little secret which perhaps helps us to understand how he has taken to Arsenal like a duck takes to water.

“I speak to the full-backs in Spanish, to Koscielny in French and to Per in English because for him it is the same as me”. Said the Gunners goalkeeper.

“He organises people in English. Sometimes foreign players wouldn’t know what you say. That’s when you realise it’s easier to say it in their language than hoping they will understand. It can happen.”

Cech also made us privy to a few more of his secrets, such as the hours of preparation he puts in before each match, and also his ability to not let mistakes bother him and move on. Cech also elaborated on the 2006 injury he suffered at Reading, which now requires him to wear protective headgear.

He said: “I remember the first training with the team after the injury and there was a massive scramble in front of the goal. Everyone was trying to kick the ball, there were boots flying everywhere and I just dived in and grabbed the ball.

Everyone kicked me and they were ‘oh, we weren’t expecting that’. When I play I just play. I don’t think about it all. If I get injured, I get injured. That’s the way it is. You can’t avoid things like that.

“During the game I never think about what happens if I make a mistake. I just play. I concentrate on what I have to every second of the game. Then at the end of the game you can sit down and think ‘that was good or that was bad.”

Cech is expected to be in nets for Arsenal against visitors Newcastle United at the weekend, with no news yet on whether or not Arsenal No.2 David Ospina will be in goal for the following weekends FA Cup clash with Sunderland at the Stadium of Light.