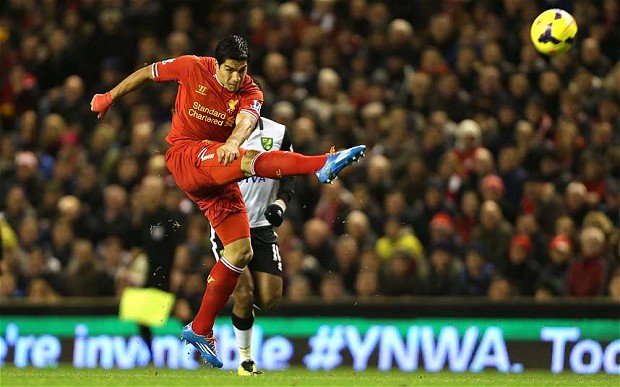 Liverpool star striker Luis Suarez has pledged to carry on scoring goals in order to get Liverpool back into the Champions League.

The Uruguayan international fired four goals past a stunned Norwich City last night at Anfield as well as providing the assist for Raheem Sterling’s goal in Liverpool’s 5-1 win over the Canaries.

Just last summer Liverpool’s top striker was talking about leaving the club due to lack of European football, and now just a few months later he is keen to maintain his present form in order to be able to get the reds back into Europe.

“I think we can achieve what we set out to do,” the 26-year-old told Spanish newspaper MARCA after the match.

“My aim is just to help make the team better. My job is just to score the goals that mean we keep winning games and get as high in the table as possible.

“I am happy to be in the Premier League, the best league there is.

“I don’t know about challenging for the title, but we want to be as high up in the table as possible and do as well as we can. I think we can achieve our target.”

Suarez is now the Premierships leading goal scorer having found the back of the net 13 times in just nine games.

Despite his fantastic solo performance he said that the most important thing for the team was to bounce back after their poor performance in the loss to Hull City last Sunday.

“It was most important we won. I helped the team and I am so happy,” he told LFC TV.

“It is good for me but for the club it is important for confidence for the next game.

“It is very important because we lost the last game and played very badly. We know when you play at home you have to be strong.”