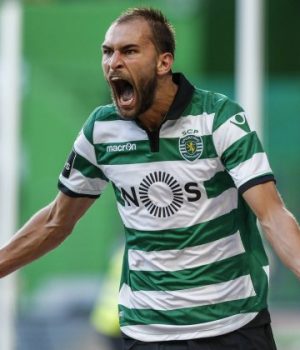 When strikers come to mind, we all think of the likes of Ronaldo, Messi and Aguero. But in the Portuguese Primeira Liga, Dutch International Striker Bas Dost, 27, has been a revelation for Sporting Lisbon since joining from Wolfsburg last summer. Dost has scored 26 goals in 31 appearances for the club this season.

And though many believe the Primeira Liga not to be as competitive as other leagues across Europe, the record Dost has is currently amongst the best in Europe.

The Dutch International has great work rate and can hold the line very well, bringing players in to the game with his hold up of the ball and though not the quickest, his instincts in front of goal are as good as Ruud Van Nistelrooy. Dost can shoot from distance and has great heading abilities which make the striker multi-dimensional rather than just offering one option from crosses into the box.

With Dost able to provide a real threat in front of goal, many clubs will look at the Sporting Lisbon striker to provide goals and glory to their season.
Newcastle, who were interested in the striker before his move to Sporting Lisbon, may come back in for the 27-year-old especially if they are successful in gaining promotion to the Premier League.

Other clubs who could potentially be interested are Liverpool, who are currently playing without an out and out striker since Jurgen Klopp’s trust in Daniel Sturridge faded away and the English striker’s future looks to be away from Anfield. Dost would be a great fit to the Merseyside cub and would have no issues in adapting to the Premier League.

Bas Dost has many years ahead of him and looks to be in his peak. A move away from Portugal looks likely and the 60 million Euro release clause Sporting Lisbon have upon him will not deter clubs to spend on a player who can guarantee 20 goals a season. Let’s hope we see the Dutch International grace the fields of English football this summer!