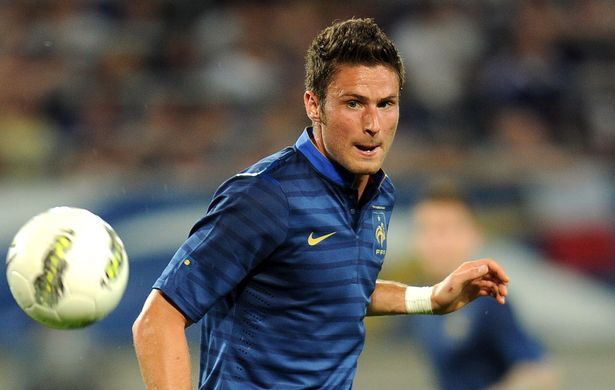 Arsenal have received it biggest positive news yet on the injury front after Arsene Wenger confirmed that Olivier Giroud is set to return to training after the next round of international matches.

The Manager confirmed that Olivier Giroud is way ahead of schedule in his recovery from a broken tibia, after he was initially expected to return until the New Year.

The 28 year old striker suffered a broken leg in the closing stages of the Premier League match against Everton at Goodison Park in August.

After surgery on 26 August, he was expected to be out until January, 2015 at the earliest.

However, after pictures of his rehabilitation emerged from France a couple of weeks ago, it was thought at the time that he could make an early return from his injury.

And Arsene Wenger’s confirmation of his return to training in November represents a huge boost for the club.

In the French international’s absence, Arsenal has had to rely solely on Danny Welbeck as Yaya Sanogo has been out since August, although the latter returns this weekend against Burnley.

Even though the club has managed to stay in the running for the top four places in the league, Oliver Giroud has been missed in some matches Arsenal have played this season.

In the matches against Chelsea, Hull City, Tottenham Hotspur and even Borussia Dortmund in the Champions League, the team could have been served by a player with the physical attributes of Olivier Giroud who can keep defenders busy, and who has the ability to hold the ball for long.

This is not a slight on Danny Welbeck in anyway, the England international has done admirably well, but he does not possess the physical brawn nature of an Olivier Giroud.

The Frenchman showed his physical prowess in the last match he played before he got injured against Everton.

He came on as a substitute for Alexis Sanchez and gave a torrid time to Sylvain Distin and John Stones before scoring from a header off a cross from Nacho Monreal.

Although he does not have the pace to move positions like Danny Welbeck, his other attributes can always serve Arsenal very well especially when he stays between the centre halves.

He would never be one who stays on the shoulders of a defender, but his ability to put himself about could have come in handy in the match against Chelsea at the Bridge for example.

The ball just seem to bounce off John Terry, Gary Cahill and Branislav Ivanonic because there was no variation to Arsenal’s play as the short passing game could not break down Chelsea’s defence.

If Olivier Giroud was present, the play could have been varied with crosses into the box which would have kept Terry and Cahill busy, and the second balls could have been picked up by Arsenal’s midfield.

Although, it is still some time before he would return.

It could still take up to December before he makes a competitive return as Arsene Wenger is likely to adopt a cautious approach when he is finally ready to play again.