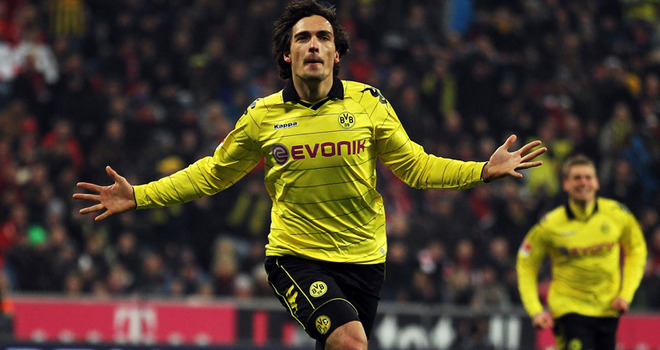 Arsenal appears to have gotten ahead of Manchester United in the pursuit of Borussia Dortmund defender Mats Hummels.

Hummels was clearly the best centre-defender in the German World Cup winning side.

The German had been continually linked to the English Premiership with both Arsenal and Manchester United been the most interested in his services.

For most part of last summer, Louis van Gaal had sought to convince Borussia Dortmund to release their coveted defender and rumours have continued to indicate a £40m price tag for the German.

In fact many couldn’t believe that Manchester United would fail to land him considering the number of seasoned defenders that transferred out of the club last summer.

Over the years Manchester United have had no reason to really bother themselves with defenders as they were enjoying a powerful partnership that had been forged by the duo of Rio Ferdinand and Nemanja Vidic.

Sir Alex who was in charge at the time, hired Jonny Evans, Chris Smalling and Phil Jones with the hope that they would benefit and develop from the experience of the more experienced defenders.

However, the exit of Rio and Vidic left a huge void at the heart of the Red Devils defence as the defensive ‘students’ failed to deliver and many pundits pointed to Mats Hummels as one who had the talent, poise and determination to fill the void. With the free spending nature that the Red Devils displayed over the summer, everyone expected a huge offer to be made to the Hummel’s German employers.

Unfortunately with these rumours, Arsenal may have just found the missing link in their defence and with the services of someone like Hummels, the Gunner’s tittle credentials appear to have been solidified.

However bad the Gunners say their defence is, Manchester United’s is worse.

Although, the frail status of the defensive section has been attributed to the injuries sustained by most of the defenders, the questions about their quality still remain unanswered.

None of them could bench an ageing Rio Ferdinand or Nemanja Vidic until they voluntarily quit the club.

Trust me that is not the kind of quality the Red Devils need for now. But for the dependable Marcos Rojo, things might have been worse.

Whatever you hear about Hummel’s movement, until he is unveiled, anything can still happen.

It is true that he said he could only switch to a club that plays similar pattern with Dortmund so that still puts Manchester United in the race.

Hence, by January, Louis van Gaal should table a bid, a real one this time not the phantom ones we hear most of the time.

Ron Vlaar and Ryan Shawcross are good but they don’t have Hummels ability neither do they have his age advantage.

Hummels is van Gaal’s best bet and his deal should be paramount, even ahead of Kevin Strootman or Arturo Vidal.

The team already has Daley Blind and Michael Carrick to help out in the midfield but what they don’t have is a defender that can stick his neck where others guard their legs….and that man is Hummels.