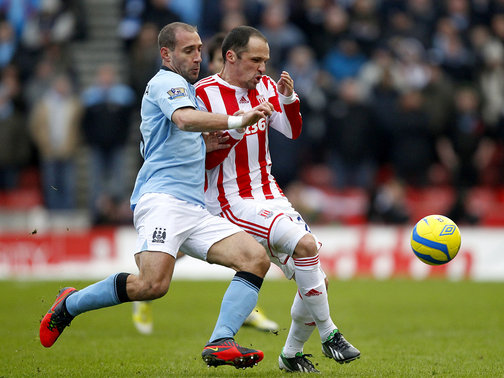 Manchester City defender Pablo Zabaleta believes that his club are on their way to becoming one of the biggest clubs in Europe.

Since Qatari Sheikh Mansour took over ownership of the club Manchester City has become one of the dominant teams in the Barclays Premiership winning the title back in 2012.

This success however is yet to materialize in Europe after failing to impress in the Champions league.

Argentinian international Zabaleta believes that is all about to change as the Mancunians take on CSKA Moscow at the Etihad tonight knowing that a win will put them through to the knockout stage of the competition, something they have not managed to do in their last two campaigns.

“In the last four or five years, this club has improved incredibly,” he said.

“We know that the owners have spent so much money to try to build a good team and to try to be one of the best teams in Europe.

“We know it takes time. We won the FA Cup, we won the Premier League, but the Champions League is different. You play against the best teams and it has not been easy.

“But now we are very positive and everything is set for this club to take a step forward.

“If we can qualify for the next round, it would be great for this club. We are still improving and hopefully in the next few years, we can be one of the top clubs in Europe.”

“We have a great chance to go through if we can win,” he said.

“It is time for us to win. The last two seasons have been really poor in the Champions League and we are all focused on improving.

“We want to take a step forward and qualify for the next round.”