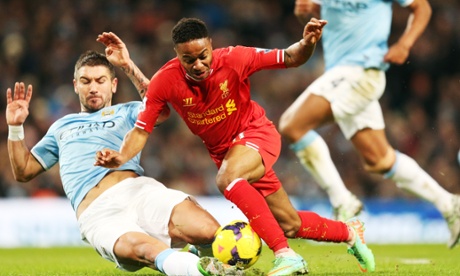 Brendan Rodgers has had a lot to say about the refereeing in Liverpool’s 2-1 loss to Manchester City, and was especially angry about the offside decision against Raheem Sterling and a couple of fouls by Lescott on Suarez while also questioning the appointment of referee Lee Mason.

Rodgers said: “Hopefully we won’t have a Greater Manchester referee with Liverpool-Manchester games in future.”

He added: “We had nothing that went our way at all.”

“I never go on about officials but I thought they were horrendous,” he said.

“The linesman gave Raheem offside in the first half but they were not even on the same cut of grass. If you are working at this level you have got to get those right.

“I’m asking young players to make those runs, he does it perfectly, and is given offside.

“There was another incident in the second half when Luis should have had a free-kick on the edge of the box and arguably there was a penalty late on.

Rodgers then went on to comment on the appointment of referee Lee Mason who is from Bolton saying: “I was surprised that we are playing in Manchester and we had a referee from Greater Manchester,” he added. “I was surprised when I saw it but that’s by the by.

“For Liverpool against Manchester City, I don’t think we’d get an official from Wirral.”

You can watch the horrendous offside decision against Sterling in the video below.