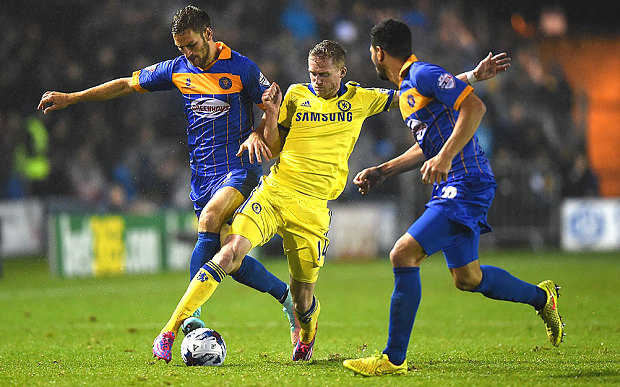 A number of players who played in the 2-1 over Shrewsbury town are really making the job of Jose Mourinho easy for him. It was evident that the manager would not really have too much headache selecting his starting XI for Saturday’s game against Queens Park Rangers.

Players like Andre Schurrle and Mohamed Salah did little to justify their inclusion in the starting XI after putting up a weak performance and Jose Mourinho has voiced out his displeasure at the pair’s display Tuesday night.

“Yes. I can say yes, because if players that played 90 minutes two days ago were fantastic, I expect people that are not playing a lot to raise the level, to give me problems.” Mourinho said:

The manager expected both players to make huge impact in the game against Shrewsbury but the players didn’t just come to the party. Salah in particular was wasteful with his balls and Chelsea only needed a goal from a 36-year-old Didier Drogba and a late own goal from Grandison to edge out Shrewsbury 2-1 on the night.

Their performance is simply one that can make Mourinho have less to think about choosing his starting XI on Saturday. Mourinho in all his teams has always had his untouchables. These are players that are always the first name on the list in every match.

During his first stint at the club, players like Cech, Terry, Carvalho, Ashley Cole, Michael Essien, Claude Makalele, Lampard Drogba and Michael Ballack were among the untouchable and it is easy for him to pick one or two more players to complete his preferred starting XI.

Recently, Mourinho looked to have found his preferred choice in all of the positions except for the right wing were the choice has always been between Andre Schurrle(when fit) and Willian and occasionally Salah. Schurrle’s recent performance will leave Willian as the clear favourite to nail down that spot.

His Tuesday performance could however, be explained away as the player not having regained full fitness after he has been side lined for weeks with illness. But Salah hasn’t really lived up to expectations since joining the club in January.

Jose Mourinho will still give the players time to prove themselves (though might not be in the next game) and it is left for the players to show the manager they really have what it take to be in the team as performance like last nights could see them receive the Mourinho’s treatment (which is to show them the exit do).

Mourinho is not really known to have a lot of patience with underperforming players. He wants all his players at their best all of the time and I fear if Schurrle and Salah could offer that kind of consistency.

Both player are good players on their day especially Schurrle. But in a big club as Chelsea, consistent peak performance is the only thing that can guarantee a player a regular shirt. Schurrle and Salah will need to raise their games and be a little bit of consistent with their performances before the Portuguese manager gives them his treatment.