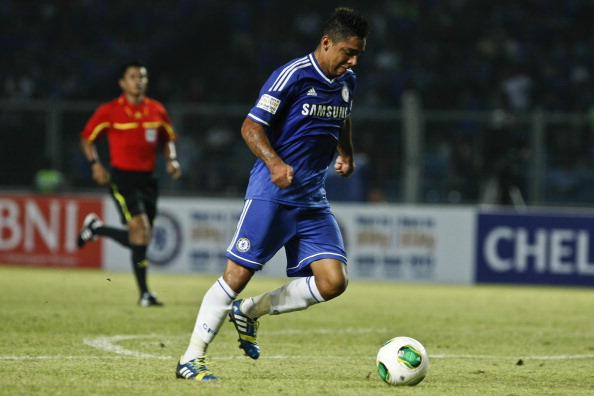 Chelsea have had their treatment room swell recently with a number of injured players and it seems the club is yet to have had the last of injuries with another player said to be injured.

This time, it is Wallace who is on loan at Dutch side Vitesse. The youngster is said to have broken his left hand during the 2-2 draw with NAC Breda in the Dutch Eredivisie over the weekend.

The player was taken to hospital after the game and a scan has shown that the 20-year-old has fractured his hand. The player is expected to be able to continue to play with the club looking for some sort of special cast the Brazilian can wear over the hand in order to continue to play.

Wallace Oliveira Dos Santos, a natural right full back joined Chelsea in the summer of 2013 from Brazilian side Fluminense. He is yet to make his senior debut in a competitive game for Chelsea though he was part of the pre-season.

He was later sent on loan to Inter Milan when the club couldn’t secure a work permit for him. The loan did not quite go well as the player only managed three appearances of the Seria A outfit that were going through a rebuilding process.

He joined Dutch side Vitesse on loan last summer and has hit the ground running. He already made eight appearances for the Eredivisie side and has impressed for the club at right back.

His loan is seen as one of the developmental process he needs before making his Chelsea career. Chelsea have a very good relationship with Vitesse which have seen lots of our youngsters been loaned to the club both presently and in time past.

Vitesse is seen by many as Chelsea feeder team with Chelsea players like Gael Kakuta, Kenneth Omeruo, Tomas Kalas, Patrick Van Aanholt, Nemanja Matic all at one time or the other had stints with the Dutch outfit. Chelsea also bought Marco Van Ginkel from Vitesse in the summer of 2013.

With Branislav Ivanovic already on the other side of 30, many have tipped Wallace to take over the right back spot when the Serbian calls it quit with the club. He has represented Brazil at the U-17 and U-20 levels and with his recent performance could be in contention for the Olympic squad.

He is highly regard by Jose Mourinho and his staff and could be asked to join the first team when his loan deal with Vitesse expires in the summer. Chelsea will also hope that the latest injury does not have much negative impact on him so he can continue with his already impressive progress in the Dutch league.