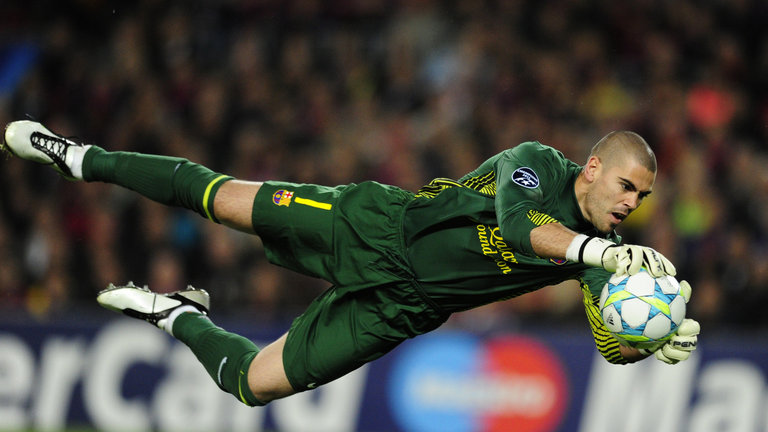 It is no longer news that Barcelona’s former goalkeeper Victor Valdes has joined the ranks of new faces at Old Trafford.

The Spanish international tore his anterior cruciate ligament in March, an injury that ruled him out of the World Cup at Brazil and is presently a free agent having turned down a contract extension with the Catalan giants.

Brendan Rodgers who is a long term fan of Valdes has been seriously linked with a move to lure the goalie to Anfield but after several attempts to seal the move, the deal fell through.

It was however surprising to learn that Valdes’s agent, Gines Carvajal and another representative met with some top echelons at the Old Trafford club last week.

The 32-year-old who appeared over 500 times for Barcelona was pictured twice last week Friday at the clubs AON training facility, at first when he was in the gym, talking and working with Manchester United physios and when he arrived back at his hotel same day after completing training at the Carrington Training Centre.

Valdes was widely reported to be working on a deal with the club and is expected to be a full Red Devil this week but with reports filtering in; it appears that the Spaniard already has a change of mind.

It is not as if Manchester United are in dire need of a safe-hand at the moment, David De Gea may not have Valdes’s experience but he isn’t of the same age with him either, and with the rate of development that David is showing of recent, the last thing he needs is a competition that will see his game time drastically reduce.

More so, it appears that manager, Louis van Gaal agrees with this view has he sternly played down the rumours that he invited the Spaniard over with a view to keeping him on the long term.

The Van Gaal-Valdes relationship dates back to the 2002-2003 season when van Gaal oversaw Valdes’s development while he was in charge of the Catalan club.

While fielding questions from reporters on Friday afternoon, the manager had a couple of good things to say about the former Barcelona man:

Louis van Gaal was quick to point out another incident that in fact favoured Manchester United when he afforded Robin van Persie medical attention with the Dutch national team, the manager explained that:

‘Robin van Persie, when he played for me in the Dutch squad last year, I allowed him to come to our medical department to get him fit for the World Cup. It is the same. I wasn’t the manager of United at the time. So I have always done that, and not only with big players but the ones you have never heard of.’

Even though the manager was a bit subtle with his comments when he was asked if Valdes could get a deal at Old Trafford, he maintained that the club always have their eyes open.

So now that the Spaniard is reluctant to even consider a possible deal, then Manchester United could as well look elsewhere and with De Gea’s current form, a less expensive, in-experienced goalie will suffice.