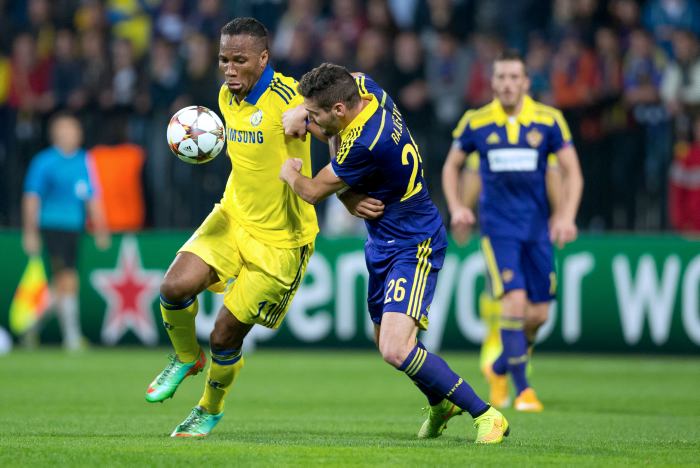 Chelsea and NK Maribor played out a 1-1 draw in a match were result would have gone either way had both teams taken their chances in front of goals.

It was the match day four of the Uefa Champions League at the People’s Garden as the stadium is called in Slovenia and Maribor were prepared not to allow the 6-0 thumping in the reverse fixture of the same game at Stamford Bridge to repeat itself in front of their home fans.

The first half didn’t really have much to offer from both side, but the Stadium would come alive after the host took the lead at the 50th minute mark through a well placed effort from Agim Ibraimi.

It took Chelsea until the 73rd minute to find an equalizer through Nemanja Matic when he tapped in a Cesc Febregas corner kick from close range. Chelsea would have taken the lead and subsequent three points if Eden Hazard had converted the penalty awarded to him but his tame effort was well saved by the goalkeeper who had earlier saved the Belgian’s attempt when through one-on-one with the goalkeeper.

Chelsea still lead the group with 8points but missed the chance to book their spot in the round of 16 with two games to spare and here are five lessons learnt from the Maribor game.

1. Schurrle Squanders His Opportunity Again: Andre Schurrle and Mohamed Salah were heavily criticised by Jose Mourinho for their performances against Shrewsbury Town in the Capital One Cup game a week ago and one would have expected the German to up his game when given the nod ahead of Oscar in this game.

Schurrle however failed to make any impression that he is one the club can count on. He once again failed to impose himself in the game. His runs were not well timed; his passes not accurate and his attempts were lazy.

It was no surprise to see Mourinho bring him off for Oscar at half time and one will begin to wonder how much of a patience can Jose have on the German World Cup winner.

2. Chelsea Couldn’t Rest Key Players: With game against Liverpool just two days away, everyone thought Chelsea would have tried to wrap up the game at first half and give some breath to players like Hazard, Fabregas, and Ivanovic.

But Chelsea couldn’t make anything out of the first half and even went behind five minutes into the second half which meant most of the player laboured until the full duration of the match.

It is yet to be seen how well the players will be able to recover within the few hours left to face Liverpool who rested most of their regulars in their game against Real Madrid a day before. Chelsea visit Anfield in an early kick-off Saturday afternoon.

3. Mourinho Got His First Half Substitution Spot On: Jose Mourinho rang two changes at the start of the second half bringing on Diego Costa and Oscar for Willian and Andre Schurrle respectively.

Willian playing as no.10 behind the striker saw one of his worst game in the night while Schurrle couldn’t just come in into the game. Both players were lethargic to say the least and the introduction of Oscar and Costa was spot on and came at the right time too.

Oscar changed the course of the game, driving the team forward and was unplayable in the midfield. Costa though he couldn’t score also caused Maribor defenders all sort of troubles.

Had two good shots on target though was denied by the excellent Jasmin Handanovic? His goal was also wrongly ruled out for offside with video footage showing Fabregas was on the same level as the Maribor defenders.

4. Chelsea Failed To Book Round 16 Spot Yet: A win for Chelsea in the night would have guaranteed them an automatic spot in the next stage of the competition but the visitors failed to capitalise on their advantage.

They will now need to wait until match day five at least against Schalke04 away in Germany to see if they can qualify with a game to spare.

Chelsea would have made their job easier if they had booked qualification into round 16 with two games to spare. It would have allowed the club to concentrate on other areas like the league and domestic cups while also trying out fresh legs and method in the remaining two group games.

A win away over Schalke latter in the month will however all but guarantee the club qualification and top spot in the group.

5. Referee Didn’t Have A Good Performance: Centre referee, Daniele Orsato didn’t show why he is a Uefa certified referee with most of his calls not spot on in the night.

The referee and his assistants wrongly denied Diego Costa his goal assuming Cesc Fabregas was offside. Replay however, showed the Spanish playmaker was on level with two of Maribor centre backs.

Oscar was also tripped in the box from behind denying the Brazilian a goal scoring opportunity and the referee waved it off for play to continue. Maybe the game wouldn’t have ended at just 1-1 if the referee had gotten his calls right.