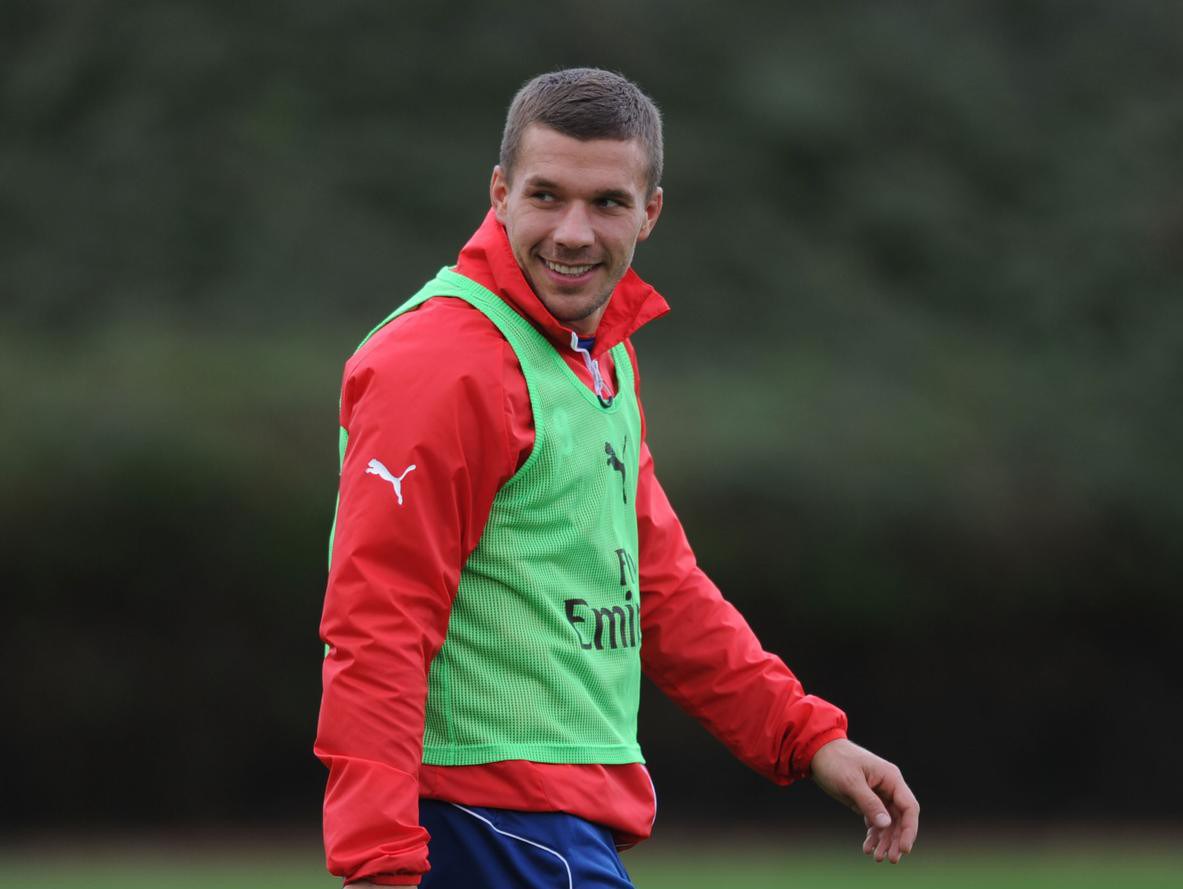 Inter Milan of Italy would reportedly look to sign Arsenal’s Lukas Podolski if they fail in their attempt at luring Fabio Borini away from Liverpool.

According to FcInterNews.it the Milan based club would ask of Podolski’s availability from Arsenal if their pursuit of Italian forward Fabio Borini fails.

Both Podolski and Borini have not had regular playing time at the respective clubs this term, a situation Inter Milan are ready to cash in on.

Podolski has made just 1 start for Arsenal this season, in the Capital One defeat to Southampton while Borini has hardly featured for Liverpool this season.

Another similarity between these players is the well documented interest of clubs in them and their determination to succeed in England with their current clubs.

Though Podolski’s contract at Arsenal expires in 2016, he has been a subject of links and speculations to clubs all over Europe.

Galatasaray and a host of German Bundesliga clubs reportedly made enquiries about Podolski in the summer but the player stated his desire to succeed at Arsenal and also underlined Arsene Wenger’s persuasion as the major reason he stayed back.

This season, the player had expressed subtly his frustrations at being on the bench but the situation hasn’t changed and doesn’t appear likely as Arsenal are still linked to more attackers in January.

The chance of Lukas Podolski in the Arsenal squad and commanding a regular spot in the squad looks very slim.

This summer Arsenal has signed Alexis Sanchez from Barcelona, who has been very impressive, to bolster an attack which depended solely on Olivier Giroud, who seemed spent towards the end of last season.

However, Lukas Podolski, who came into the team the same year as Giroud has had fewer time on the pitch but has demonstrated his lethal tendencies in front of goal, with a good number of strikes for the North London club.

Podolski, 29, is mostly deployed from the left flank of attack and his position is seriously threatened by the form and presence of players like Alexis Sanchez, Joel Campbell, Mesut Ozil, Santi Cazorla and even Alex Oxlade-Chamberlain, most of who are in their early or mid 20s and can play on the left and some in the middle.

Depending on how Wenger wants to play and the tactical approach to a particular game, Podolski would have to wait as a 3rd or even 4th choice in the left wing of Arsenal’s attack. As the top striker, Arsene Wenger has Danny Welbeck, Yaya Sanogo and Olivier Giroud, 3 big framed attackers and the manager so rates them better than Podolski in that position.

For Borini, it is almost the same case.

Borini, 23, had a successful loan spell at English Premier League rivals, Sunderland last season scoring 10 goals in all competitions but now seems very determined to deliver the goods for Liverpool against all odds.

The forward was manager Brendan Rogers’ first ever signing as Liverpool manager when he officially completed a £10.5m transfer from Roma in the Italian Serie A, on the 13th of July, 2012.

After his move, Borini revealed that it was Italy teammate, Mario Balotelli, now a Liverpool player, who urged him to join Liverpool because Balotelli claimed the club has the most exciting fans.

His career at Liverpool in his first season suffered some set-backs in form of injuries.

The player suffered a broken foot in October, 2012, in the match against Manchester United, a situation that saw him on the sidelines for 3 months and a dislocated shoulder in February, 2013, a situation that ended his 2012/2013 season.

He joined Sunderland on loan in the 2013/2014 season and there he gained his self-belief after strings of excellent performances especially his contribution to Sunderland’s battle for English Premier League survival, fighting relegation.

Since then Borini’s career had been on the rise and he joined Liverpool for this season’s challenge.

During pre-season with Liverpool, it was confirmed that Liverpool accepted a £14m bid from Sunderland but the player however, decided against the switch, instead choosing to fight for his place in the Liverpool first team.

Also news broke on transfer deadline day that Liverpool agreed a deal with QPR, after he was being told by the Reds that he no longer had a future at the club, but the player remained bent on staying put at Liverpool and blossoming.

While it isn’t clear whether Borini would re-consider his stand on playing for Liverpool, Lukas Podolski could jump at the next opportunity at leaving Arsenal with the current attacking situation at Arsenal.

For Inter Milan, Borini would properly integrate at the club by virtue of being Italian but Podolski seems a better option by virtue of his experience and goal scoring record.