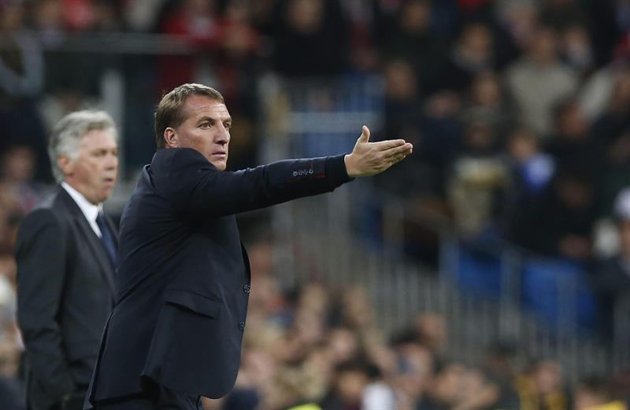 Brendan Rodgers has come in for a lot of sticks for his team selection against European champions Real Madrid in their Champions League match on Tuesday night and could risk Uefa ban for fielding what is perceived by many as a weakened side.

Everyone had expected Liverpool to field in their strongest squad against Real Madrid but it came as a rude surprise to many when the starting XI was read out and there were many first team regulars missing.

Many believed Brendan Rodgers is resting his players for the lunch-time Saturday clash with Chelsea and could be punished by Uefa if those allegations are true.

Uefa regulations states that teams must field in their strongest squad throughout the competition.

Manager Brendan Rodgers has however defended his selection and line-up as he believed the players he selected are the players he felt could get him result at the Bernabeu.

“Tonight gives me food for thought. It was not players rested as such, we played a team to get the result and we nearly did get the result. He said.

“I will be surprised if the fans are disappointed at the line-up. We’re certainly not forfeiting this game.”

Uefa simply has no case against Liverpool and Brendan Rodgers. Rodgers is the one that manages the team and he has every right to select his team based on the players he felt could give the desired result.

Simply, Uefa has no bases on punishing Liverpool as the side selected by Brendan Rodgers put up a good performance better than what the perceived strong side did in the reverse fixture at Anfield a fortnight ago.

This argument of fielding a ‘strongest team’ by Uefa should be ditched as every registered member of any team is eligible to play and the coaches are the one who could determine the strength of its players at any given time.

Liverpool team have not been performing at the level expected of them and it won’t be out of the world if the manager decide to make changes to his side in order to get result.

Though the team lost 1-0 in the night but there was nothing showing the team is a weakened side as they gave a good account of themselves against a star studded real Madrid side.

Uefa has not made any ruling on this yet, but Liverpool should be able to escape any consequences as the team chosen by Brendan Rodger have the necessary quality to prosecute the match.