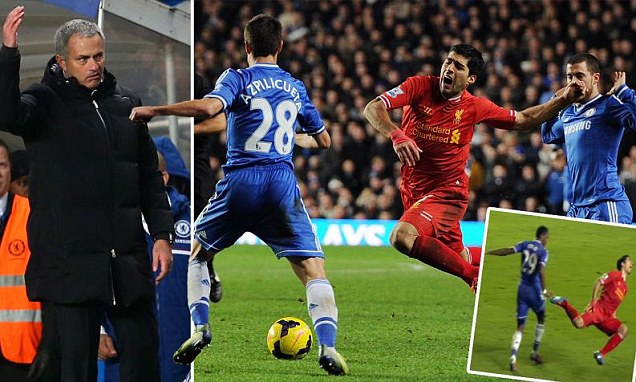 Chelsea boss Jose Mourinho has accused Liverpool’s Luis Suarez of diving during yesterday’s 2-1 win over the reds at Stamford Bridge.

Suarez was chasing a ball with Chelsea’s Cesar Azpilicueta when he went to ground in the penalty area after appearing to have been knocked off the ball by Samuel Eto’o.

While being interviewed by the BBC after the match Mourinho said: “It is not a tackle. Suarez lost the duel with Azpilicueta, who has the ball and is leaving the box.”

“Now he is doing an acrobatic swimming pool jump to try to get a penalty.”

He added: “He is so clever because he also knows he is in the area with the Liverpool supporters behind him.

“But [referee Howard] Webb is 10 metres away and I think the only mistake he did was not to give him a yellow card.”

The incident happened late in the second half when Liverpool was a goal down with time running out.

“I am always happy when I see him [Suarez] play because I love his quality, his commitment, his ambition to win. He is absolutely a fantastic player,” continued Mourinho.

“But this country is a special country. I’m not English or British but I feel I have also responsibility in defending some values in this football.

“One of the things that we have good is that we don’t like people with simulations.

“This situation in the box with Azpilicueta and Eto’o, stop with this or give him a yellow card because it is not good for our game.”