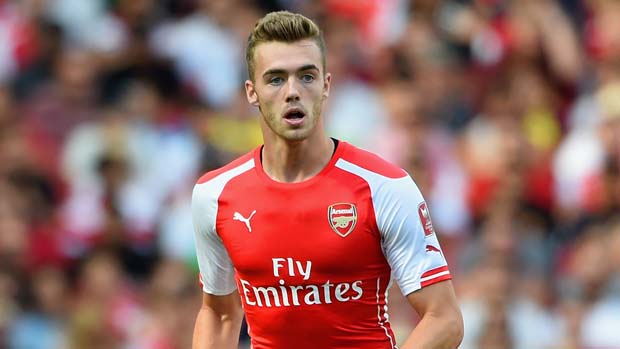 Arsene Wenger’s knack for converting players from their natural position to play in a position he feels their attributes fits as been his forte over the years. It has resulted in many square pegs in round holes in the team’s set up. When he signed Calum Chambers this summer from Southampton, he was quick to point out that the 19 year old is a right back, and that was where he played 22 times for the Saints before he was signed. Wenger was also quick to mention that he could play as a centre half and as a defensive midfielder in the long term.

However, he has now put the cats amongst the pigeons when he told French TV that Calum Chambers is a centre-back.

The question then is, if he sees him as a centre-back, why has he persisted with Nacho Monreal as a makeshift centre half? Many would have preferred to see the young English defender in central defence because his physique makes him more of a centre-back than the right back he was signed for. It is no wonder he has struggled at right back in recent times.

One other possibility that Arsene Wenger’s comments threw up regarding Calum Chambers’ position is, it could be a hint that he intends to bring in another right back. Mathieu Debuchy is currently injured, and Carl Jenkinson is out on loan with West Ham, since he claims Calum Chambers is a centre-back, could a right back be on his way? Or is this Arsene Wenger telling the fans that the centre back that the club intends to sign in January is already in the squad, and that player is Calum Chambers, as Mathieu Debuchy would have returned to the side at the time.

Arsene Wenger’s claim that Calum Chambers is a centre-back runs contrary to his claims that playing young players in centre defence could be costly.

The injury to Mathieu Debuchy has cost Arsenal its defensive stability according to Wenger. And the overall effect of that has been keenly felt in the French defender’s absence.

However, Arsene Wenger has an antecedent for descending into the arena of double speaking when any transfer window is approaching. Because simply put, you cannot say a player is a centre half, but you do not play him there but instead a left back that stands at 5ft 8in is preferred as a centre half. With the winter transfer window just 44 days away Calum Chambers is suddenly a centre half when he has barely featured there in the last one month.

And talking of the Winter transfer window, there have been reports that Arsene Wenger has £20 million as its transfer budget in January, the Frenchman can press the club for more funds if he wants to get the players that would strengthen Arsenal’s hand going into the second half of the season. However, going by the parsimonious nature of Arsene Wenger, he might choose not to spend the funds made available, but instead make more money for the club why selling some players.

Whatever designation Calum Chambers as being given whether a right back or centre-back, what is clear is that the club needs a new centre back in January.