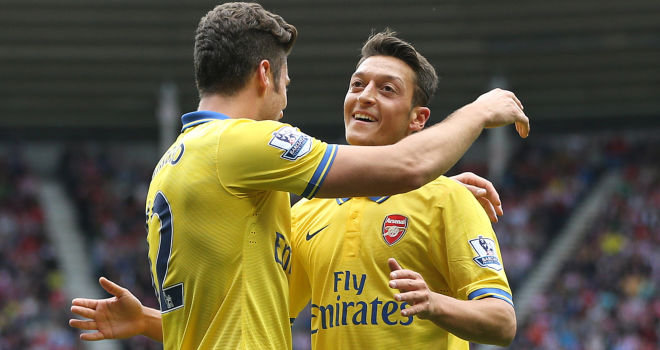 Arsenal manager Arsene Wenger was praising his new signing Mesut Özil following the Gunners 3-1 win over Sunderland in the stadium of light on the German stars debut.

The Frenchman Wenger knows there is much more to come from the 24-year-old German international despite an impressive display against the Black Cats on Saturday.

The former real Madrid player caught the fans attention after just 11 minutes when he provided the assist for Olivier Giroud’s opening goal.

Özil went on to create further chances for Arsenal and in particular Theo Walcott with boss Wenger saying that there is much more to come.

“He looked very comfortable,” the Frenchman told the club’s official website. “He is a great player and there is a lot more to come from him. He told me after the game he enjoyed it but he had a good idea of what to expect.

“We have a game that’s based a lot on movement and he gives everyone time to be available on the ball. It’s a kind of technical security and a creative side to his game that is very interesting. His final pass and his retention of the ball gives everybody time to move.”

Arsenals record signing missed training on Friday due to illness but turned up Saturday which impressed Wenger.

“There was a demand from everybody to have a player for reasons that we didn’t challenge for the title because we lost big players without being capable of bringing the same stature of players in so [his signing] was a huge lift for everybody who loves our club.”