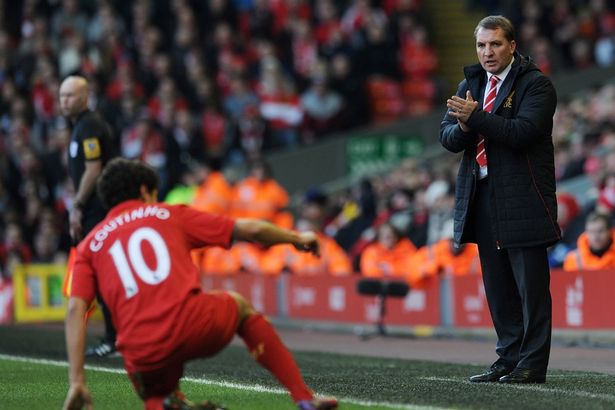 Liverpool manager Brendan Rodgers feels like the foul on Philippe Coutinho disrupted Liverpool’s flow in the second half allowing Swansea to get back into the game.

Liverpool conceded an early goal from former player Jonjo Shelvey, but were right back in it when the same player tried to pass the ball back to his keeper allowing in form Liverpool striker Daniel Sturridge to latch on to it and score.

New signing Victor Moses scored his first goal for the Reds after a solo effort went flying past Vorm in the Swansea goal.

Just ten minutes into the second half Swansea defender Ashley Williams caught Coutinho with a high challenge forcing the youngster to fall awkwardly on his shoulder.

Coutinho had been instrumental in Liverpool’s domination of midfield, but after having to be substituted Swansea were able to get back into the game, and it was not long before Spanish striker Michu levelled the score.

“It was a very good game to watch on TV,” Rodgers told Sky Sports.

“I thought the assessment was simple. In the first 65 minutes, we were very good, both with and without the ball, and we looked really in control for that first 25 minutes.

“We showed great character to come from behind so early on in the game, but probably young Coutinho going off disrupted the flow of our game.

“Then they get the second goal, which we can defend better on, and the last 20, 25 minutes, they’ve got the momentum, and we had to show resilience and character.”

Talking about the challenge on Coutinho, Rodgers said: “I haven’t seen the tackle. He’s very sore in the changing room, and we’re hoping it will only be bruising.”

The Liverpool boss said: “It’s nights like this why Jonjo came to Swansea. He’s a very, very good young player and he showed that with the first goal.

“We didn’t really want him to go, and I’m sure he didn’t want to go, but we knew it was in the best interests of a young player to go and play.

“He’s a terrific young player. He got caught out a couple of times, which led to our goals, but he’ll be better for the experience and he’ll develop into a very good player.”