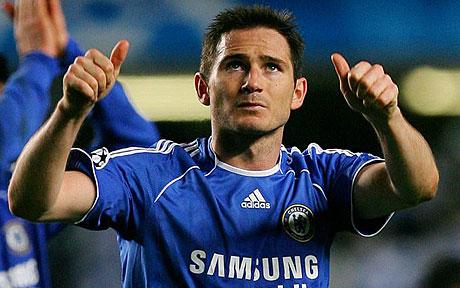 LIVING legend Frank Lampard is lined up to hit another amazing milestone tonight — when he makes his 600th appearance for Chelsea.

The England star faces Fulham with his future at Stamford Bridge far from certain but with the praise of rival boss Martin Jol ringing in his ears.

Jol said: “He’s a legend, a living legend over there. He won all the prizes over there.

“He is the most productive midfield player in England in the last 30 or 40 years.

“Everyone would love to have him. He’s fit and is a good character.”

There is still no clear sign from Chelsea that they will offer Lampard a new contract to keep him at Stamford Bridge after this season.

Lampard, who has been at Chelsea for 12 years, has been linked with moves to both Europe and America but Jol believes the Blues would be crazy to get rid of him.

Jol would love to see Lampard, 34, in a Fulham shirt but said: “I have a feeling Chelsea will keep him.

“He will have a smile on his face if he listens to Fulham but it’s hypothetical as he will never play for Fulham. I’m not sure he will play for a top-10 team.”

Lampard has won almost every major honour with Chelsea, scoring 200 goals and counting as he moves in on Bobby Tambling’s club record of 202.

He was viewed as a gamble when signed from West Ham in 2001 but the £11million now looks like a bargain.

Super Frank has not only won the Champions League, three Premier League titles and four FA Cups, he has reached double figures in every campaign for the past DECADE.

Fans reckon it is crazy he is not guaranteed a starting place under Rafa Benitez.

But the Blues boss said: “I have to consider all the squad. The main thing is the team.

“I would like to see Frank breaking the record, for sure. If he can score more than two goals, he will break the record. He’ll be happy and we will be, too. I think he’ll do it.”

Benitez has been rotating his older players but Jol has never seen age as a barrier.

Fulham have the oldest average age in the Premier League and have players in their 30s in key positions.

Keeper Mark Schwarzer is 40 but has hinted at leaving when his contract is up in the summer if he is not first choice.

Jol is looking to sign a keeper and has told the veteran Aussie he will have to compete for his place if he decides to stay.

The Dutchman added: “We are looking for a good goalkeeper so if Mark decides to stay, I will have two good goalkeepers. Plus David Stockdale is still there — although he is fed up being the No 2. Mark Schwarzer is for us almost a hero. He saves games so I would like him to stay.”