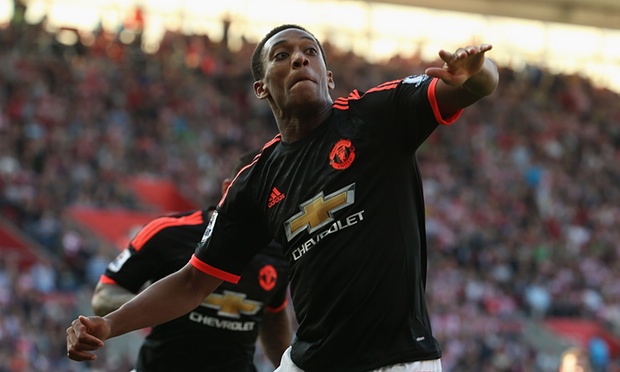 Manchester United defensive midfielder Morgan Schneiderlin cannot get over how good new signing Anthony Martial is, and has now worries that the 19-year-old striker will not live up to his hefty £36 million price tag that the Red Devils paid to French Ligue 1 side Monaco for his services.

So far since arriving from France on deadline day Martial has already racked up three goals in just two appearances including a brace to help United beat Southampton 3-2 on Sunday and move into second place in the league just two points behind cross town rivals Manchester City.

Speaking to Sky Sports Schneiderlin said: “He’s like you see him in a game, very calm, very relaxed, his head is on his shoulders.

“He’s an amazing talent, many people would have been confused by the price tag but he came to the Premier League on his toes.

“He just wants to do the best, he’s a very intelligent guy, very calm, has shown great composure, great skill and great power. He will be a great player for the future of Manchester United.”

United could so easily have lost yesterday’s match against the Frenchman’s former club, and he believes that they will have learned from their mistakes.

“The manager reminded us yesterday night and this week that we need to be careful if we are in front and too much in control that we have to stay in shape and not be too open, and not let crosses in the box.

“It has happened to us two times this season against Swansea and Southampton. We almost got punished so we need to learn very quickly again.”