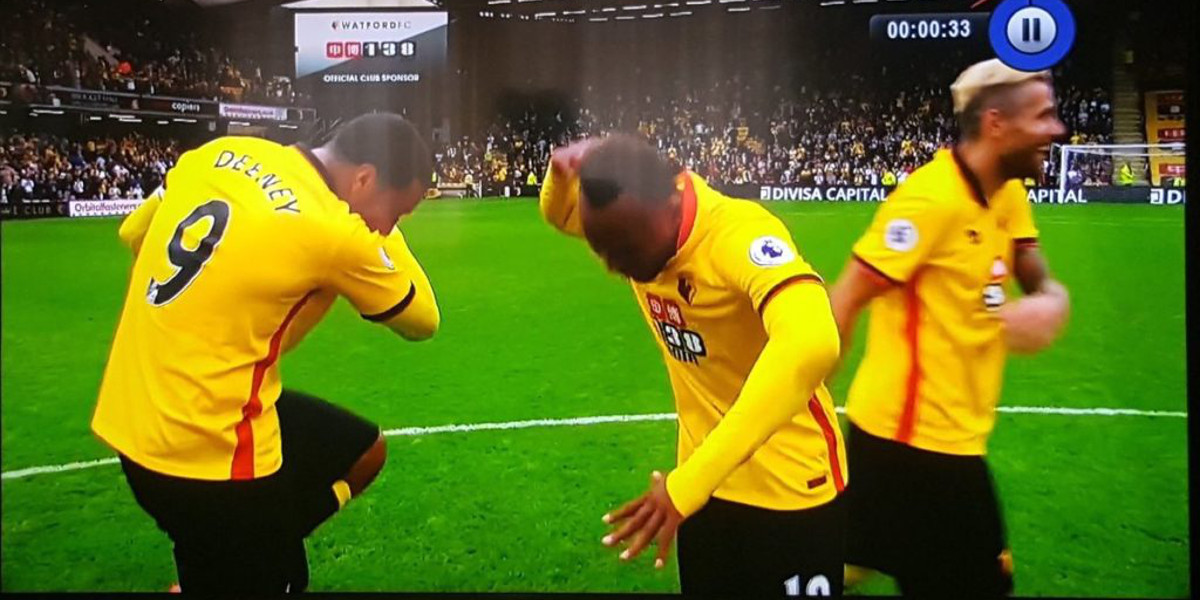 Troy Deeney and the Watford lads seem to be enjoying the underdog role, especially when the other team looks down on them and when the Hornets, in spite of their underdog status, show character and make the game sour for their posh opponents. They did that twice this season already. But they might be enjoying themselves too much.

In the last round, West Ham and Dimitri Payet embarassed Watford with the rabona pass for 2-0. By Deeney’s own confession, that was the bit that got Watford players angry. “As a player I thought they were trying to mug us off a little bit,” Deeney told BBC Radio 5 live. “You can appreciate good skill and that was great skill for the second goal, but as a professional you cannot allow someone to do that to you. You see that in the playground with six and seven-year-olds and we are grown men.”, Deeney said. Watford went on to win the game 2-4.

Deeney was at the spotlight again after the 3-1 home victory over Manchester United last weekend. First he described how he met Zlatan Ibrahimović on 10 June: “Love the guy. I’ve read his book. I saw him at the boxing [Kell Brook v Gennady Golovkin] and I shook his hand and said, ‘All the best, I’ll see you on Sunday.’ He just looked at me as if to say, ‘Who are you?’ I wasn’t angry. I was like, ‘That’s just what I expect.”.

Make no mistake, Deeney admires Zlatan for all the hard work, he went on to say “He’s the opposite to me. At the start, my fight was wondering if I belonged whereas his was knowing he was the best and having to prove it to everyone. He comes from a tough background. He’s had to earn everything.”. But surely the arrogance had to motivate Deeney a bit for the Sunday match.

And in that match they mocked Paul Pogba and his flashy goal celebration.

Contrary to popular belief, the Dab is not Pogba’s invention but was popularized by NFL star quarterback Cam Newton (and he has retired it in June). In that sport, such celebrations are sometimes considered excessive and can even often earn you a 15-yard penalty for unsportsmanlike conduct. Usually the penalties in NFL are 5 or 10 yards, but violating the rules of sportsmanship earns you a maximum penalty. As evident on this video, the opponent did find the celebration excessive and disrespectful.

cam newton is a top five human for this TD dab celebration pic.twitter.com/QAqHZElaqV

This is not the case with Barclays Premier League, where you can get away with anything, as Deeney and Zuniga have proven. Perhaps the Watford boys should be careful, or they might become the arrogant pricks they were once happy to torment. Taunting the opponent after beating him is not something the likes of Wayne Rooney or Zlatan Ibrahimović do. It’s something a kid in the playground would do. “We’re grown men”, said Deeney last week and lied.