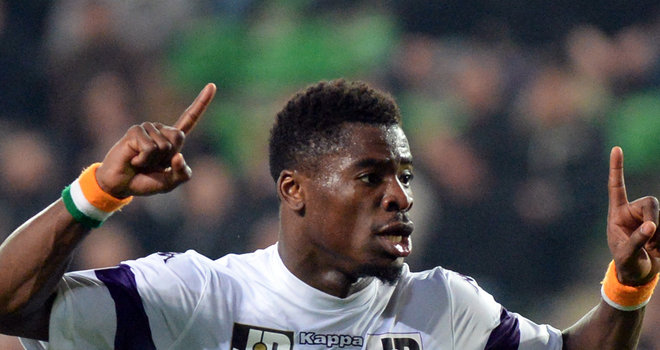 Toulouse full back Serge Aurier is doing everything he can to convince Arsenal that they should sign him going so far as to say to Footmercato.net that you “can’t refuse” an offer from Arsenal and that it would be a “a dream” to play for such a big club.

The following are quotes from various football experts on a player we suspect Arsenal will make a move for.

“One of the revelations of the season. The Toulouse right back is, after Thiago Silva, the best defender of the year according to our player notes.” Orange Sports on the defender.

“His performances are a continuation of what he’s been doing since he arrived, but with greater offensive and defensive efficiency. He’s realising his huge potential. He has such a huge will to win and desire to work that I can’t see a limit. Within a few months, he’ll be capable of starting for any big club.” Toulouse manager Alain Casanova.

“There is a disadvantage to his youth, sometimes it’s as if he’s plugged into 200,000 volts. As long as it doesn’t hurt his performances, it’s not a problem.” Former Bayern Munich defender Willy Sagnol.

“Since the start of the season Serge Aurier has become one of the best full backs in Ligue 1. The Toulouse player is even proving to be one of the most effective defenders in Europe, managing six goals and six assists.” Le 10 Sport on the Toulouse star.

Arsenal should move quickly if they want to sign him after Chelsea scouts were seen watching the 21-year-old at the weekend in Toulouse’s 2-1 home defeat to Lille.