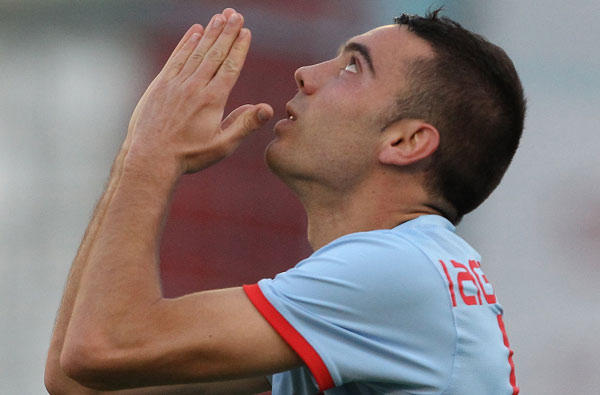 Let’s face it despite a good pre-season start to his career as a Liverpool player 26-year-old Iago Aspas has not settled into the premiership and it is time to let him go the £7.7 million Liverpool signed him from Celta Viga for would be better used now by offering him back to a la Liga side in part exchange for another player.

Even Aspas himself knows that it is time to move on telling the Daily Mail:”I’m not 20 years old anymore, I can’t go on loan and explode.”

“I think the best would be to transfer to another club that I find the best fit for myself and the club.

“I used to play almost all the matches and I arrived here – playing much less. This is the tough side of football.”

Meanwhile Liverpool sent there other back up striker Fabio Borini out on loan to Sunderland, and while there the 23-year-old has impressed Black Cats manager Gus Poyet who will be hoping to make his loan move permanent this summer, but knows Liverpool will not let him go cheaply saying: ‘Fabio has become a hero, a legend, which is great. He has really got into the club and the fans. He lives football, he’s a top professional, he’s always on time, he’s always trying to be better in training. He’s that type of person, he’s always looking after what he’s eating or what he’s not eating.

‘And when you score goals in special games, at special times like he did it gets you closer to people and gets you to play better. He’s showing what a good player he is.

‘In the beginning it was my fault he was not playing. Now, if he’s not the first one you pick, he’ll be the next one. He’s at that level.

‘I don’t know if it will be possible to sign him, it’s out of our hands but I can tell you that we like him a lot and we will try. People will say the price is going up. I’m not going to lie, he’s an important player, he’s been great. I hope he finishes the season at the same level scoring important goals.

‘If he makes us safe in the next five games then I won’t play him in the next five. Then maybe everyone will forget about him. “Fabio Borini, oh yeah rubbish,” so then we can buy him.’