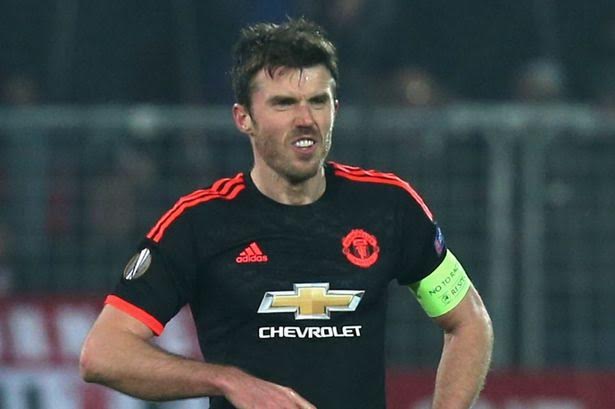 It looks as though Arsenal fans could be in for yet another disappointing summer if these latest reports are anything to go by, with the Sunday Mirror claiming that Arsenal are prepared to battle Newcastle United for Manchester United veteran Michael Carrick.

The 34-year-old defensive midfielder is out of contract at the end of the season, and has not yet been offered a new contract at Old Trafford, which means he would be allowed to join a new club on a free transfer.

According to the Sunday Express, Arsene Wenger is a big admirer of the England international, while his hometown team Newcastle United are said to be also interested.

Looking at a Carrick to Arsenal move as an outsider, we can assume that Carrick would only supplement Francis Coquelin, Mohamed Elneny and Santi Cazorla while in fact just being a replacement for 31-year-old Mathieu Flamini who is expected to leave in the summer to concentrate on his biochemical business after buying a leading American green fuel company for an undisclosed fee.

When speaking about his new acquisition Flamini said: “Climate change is the biggest issue of our time and now more than ever urgent action is required. We founded GFBiochemicals with an ambition to find sustainable alternatives to oil-based products. By acquiring Segetis, the market-leading producer of bioplastic using levulinic acid, we are a step closer to achieving that ambition.”

Taking nothing away from Carrick as he is a quality player, our only complaint is that it appears Wenger is just looking to add back-ups to the base of players he already has at the club, rather than looking to bring in fresh new talent, or world stars that can take the Gunners to the next level.

This next summer is going to be huge in the transfer market as the new £5.1 billion television deal money comes into play and with Wenger looking at bargain basement players Arsenal will miss out.

Here at Soccer Transfers we have our fingers crossed that Arsenal will win the league and that Wenger will finally decide to hang up his boots and call it a day.

If this happens then a new man in charge can start to put his own team in place and not look at 34-year-old players to bolster what he already has.