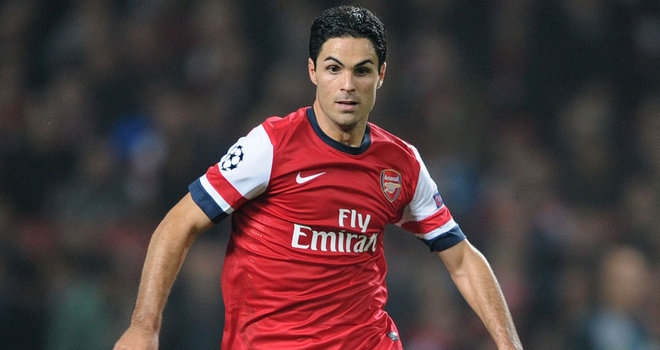 According to Arsenal midfielder Mikel Arteta things have changed at Arsenal even if it might not look like it despite the fact the team seems to have collapsed at a crucial time having only taken nine points from their last eight games.

And as Arteta visits his former club Everton on Sunday it appears that once again it could be a season where the club has to fight hard for a fourth place finish.

According to the Spaniard this is not in fact the case with the club now intent on putting silverware first telling the Daily Mail: ‘We’ve been a whole season in the title race,’ said Arteta. ‘And I don’t want to put us out of that, because there are still a lot of games to play and a lot of teams have to play against each other, so you don’t know what’s going to happen.’

He argues that the Gunners are now competing for trophies. ‘That hasn’t been the case. That’s one of the steps we’ve made. We’ve made a few steps from the last two seasons to this season and we still have a lot of things to do, because we have the championship and we have the FA Cup.’

Last season Arsenal had to struggle just to finish fourth thanks to an 11 game unbeaten run at the end of the season that saw them just pip Spurs for 4th place with Arteta saying that this season it has been much different.

‘I understand it’s not good enough. But when you try to analyse the circumstances and what you’re competing against, you can’t just say, “Because we are Arsenal, we have to finish first”. I think it’s unrealistic.’

This year considering that start to the season Arsenal has had you would not expect the players to feel the same amount of jubilation over a fourth place finish when so much more seemed possible.

‘It’s going to take a lot of effort next year because the big teams are going to spend a lot of money and bring in great players. And we have to compete with them because this Premier League is only going to get harder.’

That being said the game against Everton on Sunday may very well decide if Arsenal is to be involved in the Champions League next season or not.

‘That’s where we’re really upset. Some performances we have put in during big games away from home have really touched the season that we’ve done so far in a bad way,’ said Arteta, 32. ‘You cannot say it’s not fair. We made mistakes when we shouldn’t have and we haven’t performed when we should have in big games. We have to take it.

‘But I think overall we’ve been really consistent, when you consider the amount of injuries we had. I think we’ve stepped up a long way from last season.’

Fans frustrations are once again being vocalized after the loss to Chelsea and the 2-2 draw with Swansea.

‘They were really disappointed to lose that game at Chelsea and in the way we did,’ said Arteta. ‘It wasn’t acceptable. And the only way they can show it is when they sit at the stadium and they are not happy with what we have done, so we have to respect that.

‘But against Manchester City (last weekend, a 1-1 draw) I think we have to be grateful, because they were terrific again.’

When talking about next week’s FA Cup clash with Wigan Arteta said: ‘It is extra pressure but it is also for us a really motivating thing,’ said Arteta
‘We haven’t won anything for almost nine years, so we have a great chance to do it. We can’t just throw it away.

‘We want to win it. Do we have to? I don’t know. Probably we have to. But we really want to win it, as it will mean a turning point for the club as well. I think it would be a very important thing for the future.

‘You complete a season and win something, you get some confidence and everything starts rolling. Look at Manchester City, how many years they had without winning anything.

‘They win the FA Cup and suddenly they have started to build a different atmosphere and a different belief around the team. And we need to do that straightaway.’

‘It is disappointing to have dropped off top of course and we have to give absolutely everything to come back into it.

‘We are certainly still outsiders, but if you don’t fight and you then have results like Crystal Palace versus Chelsea and you have given up because you didn’t believe, you would be absolutely 100 per cent guilty.