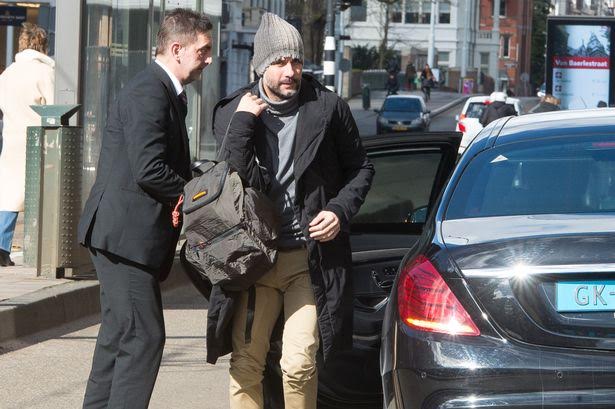 New Manchester City manager Pep Guardiola will not take over the helm at the Etihad until next summer, but is wasting no time getting all his transfer targets lined-up before moving to England.

The 45-year-old Bayern Munich trainer arrived in Amsterdam yesterday to secretly meet with Manchester City’s director of football Txiki Begiristain at an exclusive hotel in the Dutch capital, where they were expected to discuss the former Barcelona man’s transfer targets.

This meeting will not go down well in Bavaria, with the German press already questioning Guardiola’s ability to focus on Bayer Munich while knowing that in a few short months he will be taking over at Manchester City.

Just last month the Manchester Evening News claimed that Guardiola was promised a huge war chest for transfers so that he could build a new team that would take them to the top-tier of European football.

And of the names being mentioned with a move to the Etihad are 21-year-old defenders John Stones of Everton along with Athletic Bilbao’s Aymeric Laporte.

Add to this the possibility of signing big name stars such as Paul Pogba of Juventus and current Bayern Munich striker Robert Lewandowski and you can see why the pair sneaked off to Amsterdam to plat their summer business.