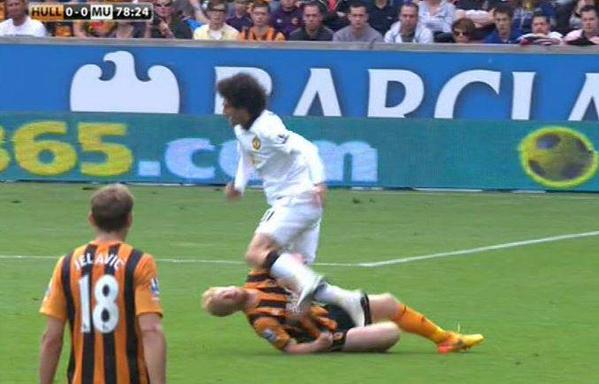 It has to be said that with his outstretched elbows and often over-exuberant tackles Marouane Fellaini is never far away from seeing a yellow card.

This tightrope playing style of play saw him come a cropper yesterday after studs up tackle on Hull City’s Paul McShane earned him a straight red card.

To be fair anyone who has been watching Fellaini this season has had to look away on several occasions following other mistimed challenges or elbows to the face of opponents fearing the referee would reach for Red.

Yesterday’s action could so easily have been avoided, yet once more we are reminded that footballers are not the sharpest tools in the shed when it comes to thinking.

Fellaini came on as a second half substitute in a match that meant absolutely nothing to Manchester United, where win lose or draw it would have no effect on the clubs standing, but what the big Belgium has done now could affect manager Louis van Gaal’s preparations for next season knowing that Fellaini will be suspended for the first three games of the season.