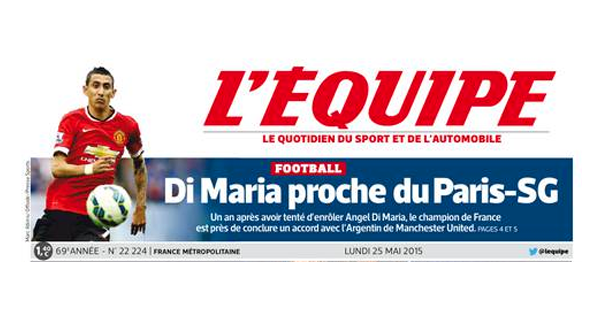 Monday mornings headline on French sports daily L’Equipe will be of interest to Manchester United fans as it claims that the Argentinians nightmare at Old Trafford could be coming to an end with Paris Saint-Germain ready to make Louis van Gaal an offer for his services.

L’Equipe points out that PSG is desperately seeking a left-sided winger and that they see Di Maria as the perfect player to fill their vacancy, while going on to claim that the French champions approached Manchester United about his availability during the January transfer window.

Where this story could have legs however is that L’Equipe is suggesting the Parisians could temp United into selling by offering the Red Devils Dutch international right-back Gregory Van der Wiel into the mix.

The paper also ran a pole asking readers what they thought about Angel Di Maria moving to the Parc des Princes, and 66% said they were in favour of it happening.