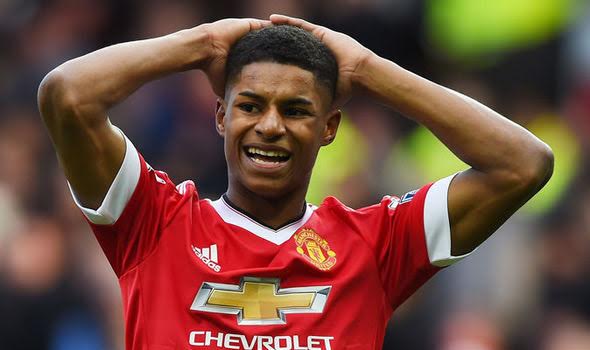 It is hard to believe, but the Daily Express is saying that four-goal hero Marcus Rashford’s place in manager Louis van Gaal’s starting XI for tonight’s home game against Watford could be in doubt following the return of three Red Devil stars.

Chris Smalling, Matteo Darmian, and more worryingly for the 18-year-old Rashford is that French striker Anthony Martial are all set to return for tonight’s 8pm kick-off against the Hornets.

It would appear as though former Monaco striker Martial has recovered from a hamstring injury that forced the 20-year-old to miss the clubs last two games against Arsenal and Midtjylland, matches in which youngster Rashford managed to score four goals.

Martial is always going to be Dutch trainer Louis van Gaal’s first choice following his big money move from Ligue 1 which has seen him score ten goals for United so far this season.

“Players are coming back. It is positive,” Louis van Gaal said.

“We need players who are coming back because our programme is very full.

“We have to wait and see for tomorrow – it depends how they feel but the chance is there that one of these three players’ plays.”

Meanwhile injured club captain Wayne Rooney is set to fly to Dubai for a warm-weather break after being told he does not require surgery on his injured knee.

The England international suffered ligament damage in the 2-1 defeat to Sunderland and has been resting in the hope that he will be able to return later this month.