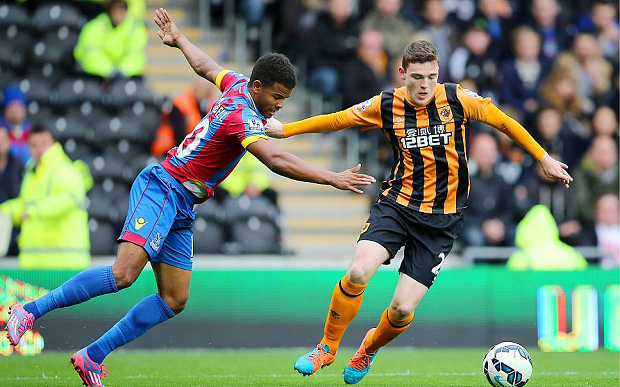 Reports in today’s Daily Express newspaper suggests that Hull left-back Andy Robertson could be leaving the KC Stadium as early as January after having captured the attention of the two Premier League giants.

Hull manager Steve Bruce only just signed Robertson in the summer from Dundee United for £2.85 million and despite having only made eight starts for the Tigers he has impressed Arsene Wenger and Louis van Gaal.

Even Bruce is said now to be resigned to the fact that he will lose the 20-year-old Scottish international to a bigger club telling the Sunday People newspaper: “There has already been one or two with phone calls asking ‘to keep me informed’. That’s always the first stage.

“I had it with Palacios when I was at Wigan and then Valencia when he went off to Man Utd. And if this kid keeps performing the way he is then it might become inevitable.

“I spoke to Gordon about him in the summer. He threw him in against Nigeria for his first cap. He took to it like a duck to water, and he has done exactly the same when offered the challenge with us.”

Should Robertson leave in January, Hull will be looking for a price tag of around £12 million.