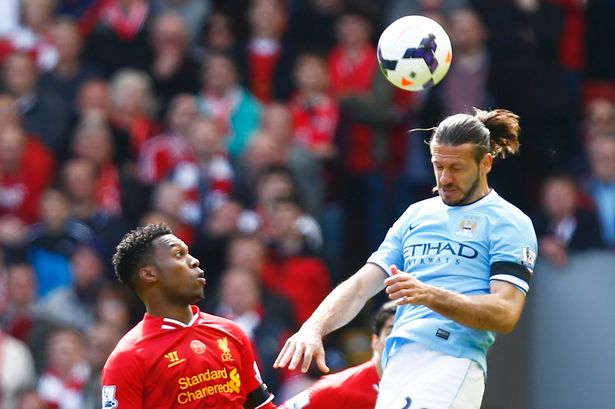 Even though after a valiant comeback Manchester City failed to deny Liverpool all three points due to a mistimed Vincent Kompany clearance falling to Liverpool’s Philippe Coutinho, other City defender Martin Demichelis is confident that they can still win the Premiership.

Yesterday’s loss at Anfield leaves Liverpool seven points behind league leaders Liverpool with two games in hand with Demichelis insisting that they can reignite the fire they found to win the title during the 2011/2012 season.

“We didn’t start well in the match and they were better than us until they scored the first,” he told the Manchester Evening News.

“Then there were a lot of set-pieces, and that is how they got the second goal, from a corner kick.

“After that there was not a lot of continuity in the match, but in the last part of the first half we played much better than them but couldn’t score.

“We started very well in the second half and got the two goals – after that Silva could have scored a third and we would have been in front, but they scored from our mistake.

“Given that we were better than them for more than 45 minutes, maybe 2-2 would have been a fair result.

“We’re obviously not happy about the result but we know we have matches ahead and you have seen in football that we can still win – they can still make mistakes.

“Hopefully we will win the rest and expect some mistakes from Liverpool. No-one left the stadium feeling they were champions, and we have plenty of matches.”