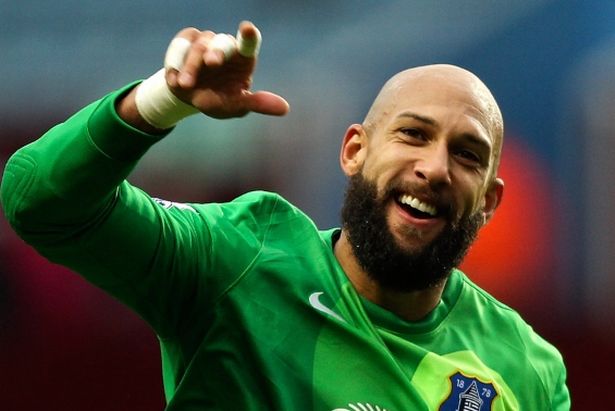 Everton very quietly slipped into that all-important Champions League 4th place over the weekend with a 0-1 away win away at lowly Sunderland to give the Toffee’s a two-point lead over the Gunners with only five matches left to play.

Everton goalkeeper American Tim Howard says now that they are ahead of Arsenal in the points standing they feel no pressure as their destiny is now in their own hands.

Arsenal can move back into 4th place should they beat West Ham Tuesday night at the Emirates  yet Howard is relieved that Everton do not now have to worry about Arsenal slipping up for them to be able to play top European football next season.

“The manager drilled into us that it would be tough,” he told the Liverpool Echo. “Now we can count them on one had. We’re going to tick the games off.

“We’re in a good mental state. We’re performing well. We feel fluid and there’s a good energy in the dressing room. We won’t feel pressure on our back from Arsenal.

“Anything can happen. There are so many ‘ifs’ and ‘buts’ but if we keep fighting we’ll finish strong so hopefully that can continue.”

Everton were made to work hard for the three points up on Wearside following Wes Brown’s own-goal 15 minutes and are determined to finish the season strongly.

He continued: “You don’t mind it being a bit scrappy every now and then because you almost want the confirmation that we’ve got it in us.

“We know we can play good football but we never want to get away from that Everton fighting spirit, that ability to dig in. Games like this remind us that’s still in us which is important.

“Even at 1-0 down they kept coming because they had a lot to fight for and it was a really tough game.”