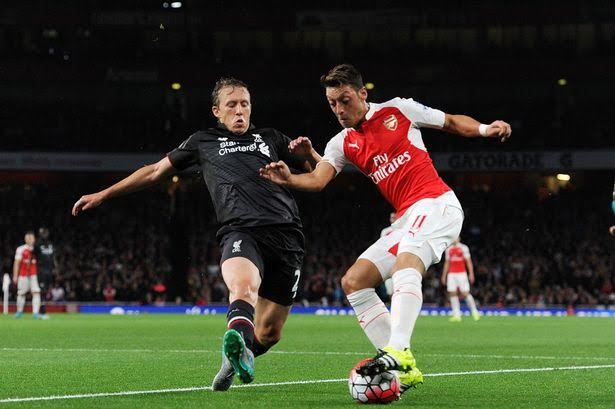 Liverpool’s defensive midfielder Lucas knew his career at Anfield was on the rocks, but stepped up to the plate when called upon for the clash at the Emirates with Arsenal, where he did enough to change Reds manager Brendan Rodgers mind into keeping him at the club.

During the summer all the talk was that the 28-year-olds time on Merseyside was coming to an end, with Turkish side Besiktas eager to take the Brazilian on loan with an option to buy at the end of the season.

Speaking about how close he came to leaving the club Lucas admits that it was probably his display in the 1-1 draw with Arsenal that saved him.

He said: “I was very frustrated that I couldn’t make the squad for the first two games, but I had to keep training and working hard because we have a lot of examples where football can change in a moment.

“Of course, I never wanted to leave Liverpool. I have a home here and my family are very happy. But sometimes you do find yourself thinking about another solution if you think that will keep your career going.

“A couple of things happened during the first couple of games that gave me the chance to play against Arsenal, and I believe it was because I was training so hard and was well prepared that I was able to come in and have a good game.

“Maybe if there hadn’t been the Arsenal game, I wouldn’t be here now. But I always believe that things happen for a reason.

“I’m very happy that I stayed and I will keep fighting for the club as I have been doing for the past eight years.”

This change of heart by the Liverpool manager was also felt by left-back Alberto Moreno, who has now been brought back into the first-team after having been dropped for new signing Joe Gomez.

Meanwhile Lucas is happy to be back in the fold, and not overly worried about the Reds poor run of results, saying it is too soon to judge the side given all the changes that have been made.

“We have to keep perspective,” he said. “It’s very early and experience has taught me not to get too carried away by victories and not to get too down after defeats.

“If we keep working hard, improving and picking up points, then we can still get to where we want to be.”