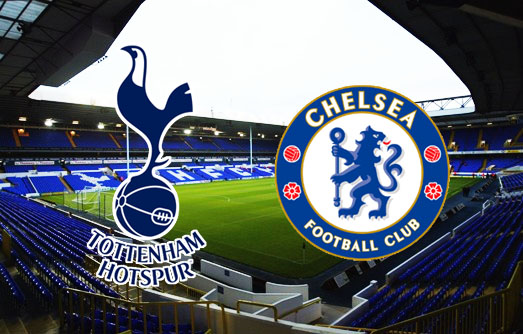 Chelsea travel the short distance to White Hart Lane on Sunday for the lunchtime kick-off against Tottenham in what is expected to be an exciting game if last season’s 5-3 loss is anything to go by, except this time Blues fans will be hoping for a different result that sees Chelsea come out on top.

This week Chelsea has won two games in a row for the first time since September, leading many fans to suggest that the club had turned the corner and were now back on track, which a win away to Spurs would confirm.

At his press conference Mourinho more or less said that he had tried everything to get Eden Hazard back to the form he showed last season, even letting him play as a No.10, the position he played when he was younger.

This however has not worked out for either the manager or the player so expect the Portuguese manager to use the Belgium international out on the left.

Missing for today’s match is team captain John Terry who did not train on Friday leading Mourinho to say he had ‘little hope’ of him returning in time for Sunday’s game.

Also missing will be Brazilian midfielder Ramires after the 28-year-old injured himself on the subpar turf while training in the stadium in Haifa, Israel ahead of the Blues Champions League match against Maccabi Tel Aviv.

With goalkeeper Thibaut Courtois and striker Radamel Falcao also both still injured this is the line-up we think Mourinho will select for today’s match.

The Blues boss has little choice but to play former shot stopper Asmir Begovic in nets, but with Belgium international Thibaut Courtois getting ready to return, now would be a good time for the Bosnian No.1 to show just how good he is.

With Terry missing for today’s match, the backline just about picks itself with Branislav Ivanovic returning to right–back after being rested for the midweek game, meaning that Spaniard Caesar Azpilicueta returns to the left-side of the pitch in his usual position. The heart of the defence will be made up with Gary Cahill hoping to erase the blunders of last season’s meeting between the two teams, pairing up with French youngster Kurt Zouma.

With Ramires missing we expect to see Nemanja Matic and Cesc Fabregas playing deep, with for us Chelsea’s best player this season Willian allowed to play as a number 10 moving Hazard far left and either Oscar or Pedro to fill in on the right flank.

Mourinho has only one option, and that is to play Diego Costa with Radamel Falcao still injured and Loic Remy given compassionate leave for the birth of his child. The Blues boss will be hoping that Costa can rekindle his goal scoring talents of failing that as he did against Arsenal’s Gabriel manage to provoke a Spurs player into getting themselves sent off.