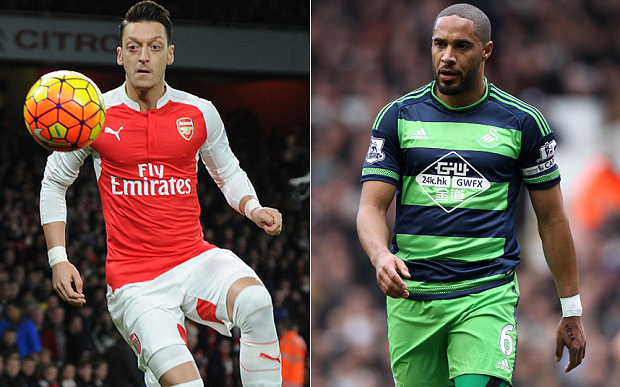 Big questions have arisen this past week including, are Arsenal now experiencing their usual Springtime collapse, and do the Gunners really have what it takes to win the Premier League title?

Most Gooners can accept that a Barcelona team led by the striker force of Messi, Suarez and Neymar are good enough to beat the best teams in Europe, but to lose a match everyone expected them to win against an embattled manager that was relying on reserve team and youth players just to put 11 players on the pitch is inexcusable.

And while on the face of it tonight’s match looks like a routine three pointer against Swansea City, nothing can be taken for granted as the players confidence seems to dwindle.

Manager Arsene Wenger has hinted about making changes to the side that lost 3-2 at Old Trafford as the highly anticipated game against North London rivals Tottenham fast approaches, a match that will most likely define Arsenal season and whether or not they really can win the league.

Former Manchester United striker Danny Welbeck will most likely be for tonight’s clash with the Swans at the Emirates having only just returned to the game after ten months on the side-lines.

Alex Oxlade-Chamberlain will certainly be missing following a knee injury which is expected to keep the England international out of the team for eight weeks as speculation mounts as to whether or not the former Southampton winger will be sold in the summer.

No point in making any changes here as we still believe that Petr Cech is one of the top three goalkeepers in the Premiership, and despite this copying of Real Madrid and Barcelona who have a keeper for the league and one for Cup games, we would start Cech every match.

Back into the team comes Mertesacker for Gabriel alongside Koscielny while, while Barcelona target Hector Bellerin continues the bang up job all season he has performed at right-back.

Over on the left we are very tempted to rest Nacho Monreal in favour of Kieran Gibbs for the clash against Spurs, but now this is a must win game in everyone’s eyes we will start the Spaniard and substitute him later on if the score is in our favour.

As Arsenal continue to struggle in the centre of the park without little Santi Cazorla to bring the ball out it will be the pairing of Francis Coquelin will start alongside Welshman Aaron Ramsey.

German playmaker Mesut Ozil was invisible in the match against Barcelona, but played much better against Manchester United, so he will continue as the Gunners No.10 while we try and decide who to play outside him.

Chilean Alexis Sanchez will automatically be given the start on the left wing, despite failing to impress since returning from his injury and must know that the club is desperate for him to recover his form and deliver the goals that are so badly needed.

Out right we will bring Campbell back in the team for Welbeck hoping that the Costa Rican can show Wenger he was wrong in dropping him for the last two losses.

We have one word for you here and that it Giroud and should remain the Frenchman until such time as Wenger finally decides to pay the money it would take to get a world-class striker to move to the Emirates. As for Walcott he is lucky to have a place on the bench, with any hope of him becoming a number nine surely now put to bed.

No if, buts, or ands, Arsenal needs to win this game or give up all hope of still being able to win the Premier League title.