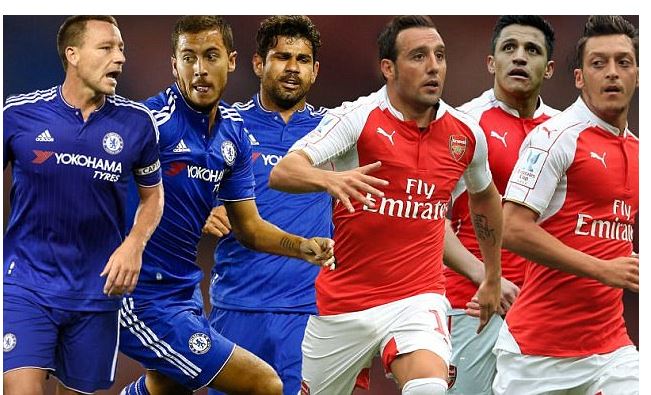 Arsenal take on Chelsea this afternoon in the Community Shield at Wembley, with the Premier Leagues traditional curtain raiser having the added spice of former Chelsea goalkeeper Petr Cech now playing for the Gunners.

Arsenal meanwhile will be hoping to replicate last season’s 3-0 win over Manchester City, as they prepare to mount what many people hope will be a serious challenge for the Premier League title.

Gunners boss Arsene Wenger will be without Chilean Alexis Sanchez, after the pacy forward was given extended time off following his role in winning the Copa America, while former Manchester United striker Danny Welbeck is still side-lined with a knee injury.

Petr Cech is set to start against his former club with players in the Chelsea team calling for the Blues supporters to show the 33-year-old goalkeeper some respect after the 11 years he gave the club at Stamford Bridge. Cech is seen by Arsenal fans as one of the few pieces of the puzzle that was missing in the Gunners quest to win the title, and it will be interesting to see how he fares against his former team this afternoon, on England’s biggest stage at Wembley.

Given Hector Bellerin’s fine form for Arsenal last season we expect him to retain his start despite the return of Frenchman Mathieu Debuchy to full-fitness. Out left it will be Nacho Monreal following the 29-year-old Spaniards new contract at the Emirates, while Per Mertesacker and Laurent Koscielny will continue in the middle of the park given the task of limiting Chelsea striker Diego Costa.

Midfield as always is where Wenger has his most difficult selection to make with more stars than he has places, but given the emergence of defensive midfielder Francis Coquelin last season the young Frenchman comes already pencilled in on Wenger’s team sheet each week. Santi Cazorla meanwhile will be allowed to play in a deeper role allowing German international Mesut Ozil to play the number 10 role he made his own towards the end of last season. Welshman Aaron Ramsey will be covering the right side of the pitch while the absence of Alexis Sanchez should provide Alex Oxlade-Chamberlain to show the Gunners boss why he deserves a starting place in the Arsenal team.

This is a tough one to decide, but given Theo Walcott’s performance in the FA Cup final we feel as though Arsene Wenger may now give him the coveted striker role that he has always wanted at the expense of Olivier Giroud, and while it is a tough one to call it will be one of those two players who spearhead the Gunners attack this afternoon against a Chelsea team Arsene Wenger has failed to beat in his last 13 attempts.

To sum things up, we all know that the Community Shield is just a prelude to what the season has to offer, but given the history between Jose Mourinho and Arsene Wenger we are sure, friendly or no friendly Arsene Wenger has a point to prove, and will go all out to do so.