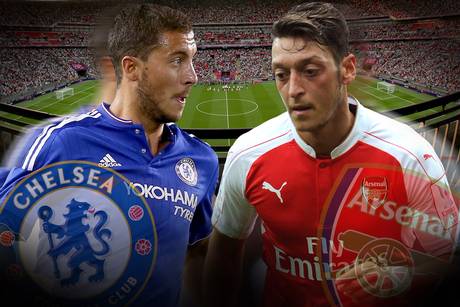 Chelsea boss Jose Mourinho gave very little away during his pre-match press conference ahead of Sunday Charity Shield clash with Arsenal at Wembley, except to say he had a fully-fit squad including Gary Cahill and Diego Costa to choose from, after both players had recovered from knocks they received during Chelsea’s pre-season tour of North America.

What this means is that newcomers Asmir Begovic and Radamel Falcao will have to be content with places on the bench.

As the Portuguese manager prepares to rekindle his rivalry with Gunners boss Arsene Wenger, he described the match as being “more than a friendly” and “less than a league game”.

Without doubt Belgium international Thibaut Courtois will start in nets, despite the signing of Bosnian No.1 Asmir Begovic who will probably take over the reins for domestic cup competitions.

Now that Gary Cahill has been given the all clear to play, Mourinho’s defence just about picks itself each week with John Terry leading the team partnering Cahill while Caesar Azpilicueta and Branislav Ivanovic patrol the flanks.

Nemanja Matic and Cesc Fabregas controlled the midfield against all opposition they came up against last season, with Matic ready to take the magic away from Mesut Ozil by not allowing the German international any space. As for Fabregas it’s never easy playing against a former team as the fans are sure to remind him, yet the Spaniard will be 100% focused looking to build upon the 18 assists he provided his Chelsea teammates last season.

Just like Cahill’s return to the defence Diego Costa being available will be a big boost to the team as the Brazilian born Spaniard is capable of winning a match almost singlehandedly.

Close in support will be the brilliant Belgium Eden Hazard along with Brazilian’s Willian and Oscar all ready to prove why when fit they are guaranteed starters in Jose Mourinho’s first XI.