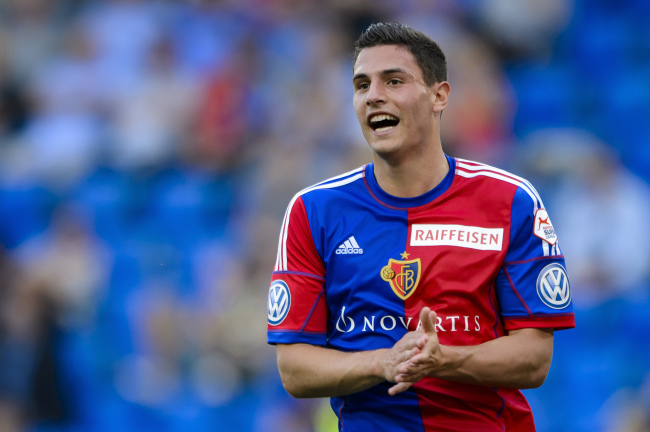 It is no longer news that Arsenal is numerically short in the defensive positions and willing to bolster the defence line in January as the lack of adequate replacement for Thomas Vermaelen and Johan Djourou and injuries have depleted the Arsenal defence.

According to The Metro, Arsenal are preparing a £10m move FC Basel’s 22-year old defender, Fabian Schar ahead of the winter transfer window which opens in January.

The player himself has been reported to prefer a move to the Emirates in January over Borussia Monchengladbach, this other suitor from the German Bundesliga.

Schar has considerable experience for a 22-year-old defender by virtue of his importance for both Basel and Switzerland.

News about gifted defenders wouldn’t cease to excite Arsenal fans who have suffered alongside the team, as a result of Arsene Wenger’s failure to replace Thomas Vermaelen during the summer transfer window. However, to many, quality and experience in Arsenal’s search of a defender really matters.

These set of fans would blatantly express disgust at a link to a player like Schar, when news reports are bandied around of Mats Hummel’s availability. This opinion is popular especially considering the fact that Per Mertesacker has started showing signs of a downward slide in performance.

While many speculate that a young and upcoming defender like Nastasic of Manchester United and Schar of Basel would come in to deputize for one of Per Mertesacker or Laurent Koscielny, others believe that what Arsenal needs is an experienced centre back that would compete with either of Koscielny or Mertesacker for space in the starting 11 and players like Mats Hummels of Borussia Dortmund, Winston Reid of West Ham United and Sokratis Papastathopoulos of Borussia Dortmund, are favoured.

Another twist to the defensive issue came up when Hector Bellerin and Isaac Hayden were officially promoted to the senior squad and many thought the numerical short fall of the Arsenal defence line may have been temporarily fixed.

As Mats Hummels and the experienced lot Arsenal has been linked to aren’t the kinds of defender that would be bought to play as back-up to either Per Mertesacker or Laurent Koscielny but rather come in to displace one of them, the likely event would see that Arsene Wenger not going for a defender with an intimidating profile like that of Hummel’s and with a £32m transfer fee valuation.

Though the manager has admitted the need for defensive bolstering in January and a plethora of defenders have been linked to Arsenal as a result of that, it wouldn’t be surprising if Arsenal already has done the bolstering with the promotion of the 2 19-year-olds, with Bellerin being the cover at right back and Isaac Hayden a central defensive back-up or move in the direction of Schar, who is also highly rated.

Another pointer to the Schar story is in the interest in Kostas Manolas, 23, in the summer.

Though Arsenal lost the race to sign the Greek defender to Roma, the age range of Arsene Wenger’s desired defender can be deduced.

Manolas almost signed for Arsenal with strong talks of his arrival in London for medicals but was scuppered by a Roma switch eventually.

With a reported £30m available for Wenger to spend in January, links to defender is the range of £10m, like Schar and Reid, should be kept an eye on as the manager has shown some serious intent to land a defensive midfielder also, many of whom may not be available for less than £20m. Therefore, Fabian Schar’s profile and progress at Basel shouldn’t be ignored as his move to Arsenal may just materialize in January.