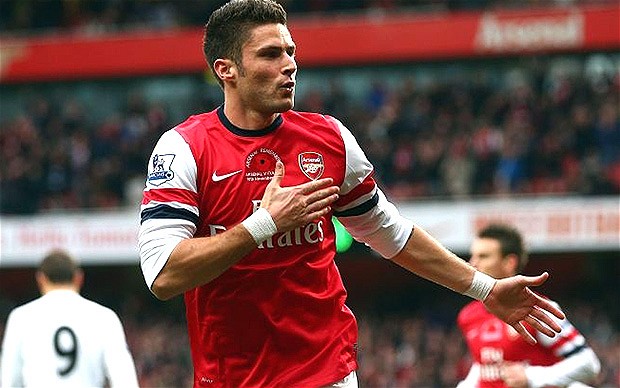 The title belongs to Arsenal striker Olivier Giroud who said he can understand how the fans must feel after seeing the clubs title race collapse, but thinks that all the players have shown great character in trying to mend the broken pieces to ensure that they win the FA Cup and finish in a Champions league berth.

The worst moment for Gunners fans had to be the humiliating 6-0 loss to Chelsea in what was Arsenal manager Arsene Wenger’s 1,000 match in charge of the north London club.

Giroud is however confident that they can get on with finishing the job at hand telling the Daily Mirror: “There are three league matches left that are all as important as the cup final. They are important, because of fourth place and the Champions League. We have closed the book on the FA Cup, we will open it again on May 17.

“At a club like Arsenal, there is a level of public expectation. I know some fans were unhappy with our defeat against Everton, because that was a match against rivals for fourth. I know some were unhappy but we responded well in the next game and showed our strength of character.

“It is essential to respond collectively to show we are going in the right direction. If we finish fourth, and if we can also win the FA Cup, it will be a good season all the same. We will have a trophy that we have waited for.

“Yes, it is true, there was a lot of expectation this year, because we were first for a long time, but unfortunately we had injuries, but we will go again next year.”

It has been a close race for fourth place, but now after Everton slipped up against Southampton over the weekend Arsenal is now in the driving seat.

He added: “I wouldn’t say we’re very confident, but we are doing well and we want to keep it up at home.

“Newcastle is still a great team but they are in a bad run. You always have to respect your opponent and hopefully we will not wake them up on Monday.

“We need to win the last three games and need to be fully concentrated against a team who needs to be respected, because they have quality, even if they are in a difficult period.”

He added: “I want to play a big part in the end of this season, score a lot of goals and be efficient for the team because everybody knows we need the three wins.

When talking about the prospect of a new contract Giroud said: “I feel that I have more strings to my bow, as I have definitely progressed, I know the Premier League better. This was my objective, to do better than last year.

“It’s good, but I still know that I can do better. I can improve ever year, and I will try to get even better, and if I do well it will show in the level of my stats.

“My objectives are like they were at Montpellier, but the Premier League is a bit harder. I still hope to score two or three more goals, overall I want 20 to 25 goals. It’s good for my second season and I have fixed my objectives for next year. It’s good to continue up front.

“It is not for me to say if clubs are right to change their coach or not. I am very happy with the boss today.

“We will see if he prolongs his contract, but we do not talk about it, I am concentrating on winning the last three games and winning the cup.”