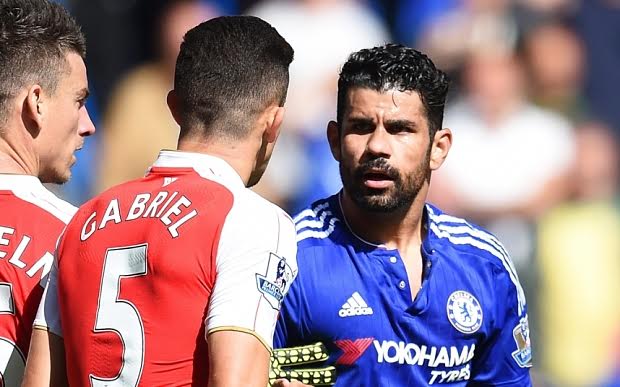 Chelsea striker Diego Costa has a well-documented past as far as dirty tricks and trying to wind up the opposition are concerned as was the case again yesterday afternoon when the Brazilian born Spanish international pushed his hands into the face of Arsenal defender Laurent Koscielny, before smacking him with the back of his hand in a move that Arsenal manager Arsene Wenger called a deliberate attempt to wind up the Gunners defence, for which he should have been sent off.

Gabriel came to the aid of Koscielny with both he and Costa pushing each other before referee Mike Dean stepped in to book the Arsenal defender. As the two players were walking back to the centre of the pitch, Costa said something to Gabriel that had the Brazilian kick out at him, giving Dean no option but to send the 26-year-old off to the dressing room.

If you look back to the history between the pair in La Liga when Costa played for Atletico Madrid, and Gabriel was at Villarreal there was an incident in the 2013/2014 season in which during a match between the two teams Costa appears to elbow Gabriel slightly, but the Yellow Submarine player reacts theatrically as you can see in the video below.

It would be surprising to know whether given Costa’s history if Wenger actually told his players not to react to any of his tricks or not, and while Koscielny behaved admirably Gabriel let Costa get to him.

Arsenal eventually lost the match 2-0 as the Gunners played out the game with nine men following a mistimed tackle by Santi Cazorla on Cesc Fabregas earning a second yellow and the resulting sending off.