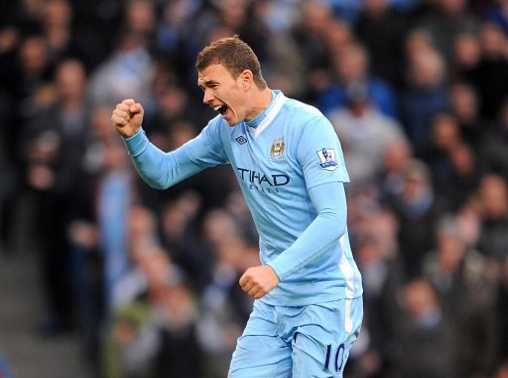 Chelsea manager Jose Mourinho has laid the groundwork that could eventually see the Blues making a bid for Manchester City striker Edin Dzeko by saying that in his opinion Dzeko should have won this seasons “Player of the Year” award rather than Liverpool’s Luis Suarez.

Mourinho has been a fan of the Bosnian international for some time, and considered trying to sign him last summer after returning to Stamford Bridge.

The 28-year-old has only a year remaining on his current contract and could be sold by City this summer unless they can get him to agree to a new deal.

Chelsea already has a deal in place for Atletico Madrid’s Diego Costa, but with Samuel Eto’o Fernando Torres and Demba Ba all on their way out the Chelsea boss knows he needs another striker and has been considering Dzeko along with Bayern Munich’s Mario Mandzukic a leading summer target for Arsenal boss Arsene Wenger.

While praising Dzeko while being interviewed by the Telegraph when asked if he would have voted for Luis Suarez Mourinho said: “He bites, not this season, the previous season. This is a different season so I’m not speaking about one mistake that a man can have, and you will have to be punished for the rest of your life if you make a mistake on the football pitch so that’s not the point for me.

“Why? Because he was the third striker in the beginning of the season, he was even behind his manager’s first choices and when the team needed him, in crucial moments of the season, or because of Agüero injuries or because of [Alvaro] Negredo’s little moments of lack of form, and other important players injuring during the season – I think [David] Silva was injured, I think [Yaya] Touré was injured – he made the difference.

“He made the difference, Dzeko. In this moment, I think he has 16 goals. Sixteen goals for the third striker is something spectacular, and not just that, the quality of his game.

“So if I would choose, and also the kind of player he is, he’s not just a goal-scorer, he assists, he plays, he behaves, he’s fair, he doesn’t dive, doesn’t try to put opponents on the stands with accumulation of cards. I would choose Dzeko.”