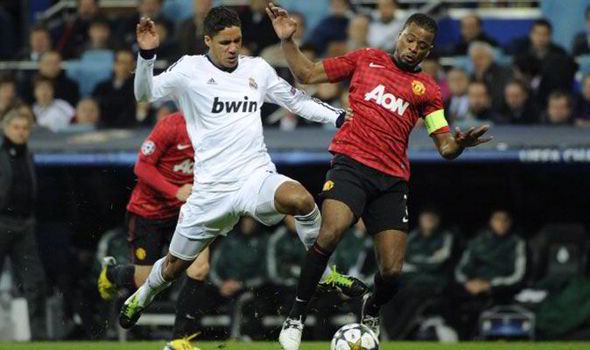 Real Madrid have reportedly slapped a £19million price tag on their want away French defender Raphael Varane even as boss Carlo Ancelotti is set to cash in on the player he has sparingly used since taking over as Madrid’s manager.

The youngster has not seen regular action under Carlo Ancelotti as the Italian manager prefers the centre partnership of Ramos and Pepe in defence and speculations are rife that the player could be set for a move away from Santiago Bernabeu with Madrid coming out to state their asking price on the player for the would-be suitors.

Chelsea and Manchester United have been strongly linked to the 21-year-old centre back with both sides looking to strengthen their back lines.

Manchester United have had a large share of problems at the rear this season a result which have seen them lost all their first team centre backs to injuries this season. The team has had most changes in the back every single game of the season hence; there has really not been any chemistry or sort of understanding within the defence line.

They would look to capitalise on the situation to sign Varane this January window as Madrid is said to want any deal for the defender rapped up as early as January.

Chelsea will however, hold a greater advantage in capturing the signature of the French defender who has been compared to former Real Madrid defender, captain and legend Fernando Hierro because of their similar playing style.

Chelsea have no defensive worries at the moment but it has been well documented that boss Jose Mourinho is already out searching for captain John Terry’s replacement and could use his connection with Varane from his time at Madrid to lure the player to Stamford Bridge.

There is no underestimating what role Mourinho’s influence will play in signing him to the Blue side of London. Mourinho was the man who brought the former Lens of France youth prodigy to Madrid in the summer of 2011 and gave him his big break at senior level in Real Madrid at just 18.

Mourinho is known to highly rate the young defender he had to bench the likes of Pepe and Ricardo Carvalho for the French prodigy. Mourinho and Varane worked together through his remaining days as Madrid’s manager and really had good relationship.

Jose Mourinho could use his influence and connection to the club to outwit Manchester United in signing the French youngster. Chelsea is currently in search of a new centre back to replace John Terry when he retires or leaves the club which most believed could be at the end of the season.

A lot of young defenders have been linked to the club but Varane seems to stand out as Mourinho’s favourite to replace his veteran captain. The quoted price of 19million would be a bargain and wouldn’t be much of a problem for Chelsea to pay considering Varane’s age and what a player he has matured to be at such tender age.

Chelsea still have young defenders in their rank like Kurt Zouma, Andre Christensen, Kenneth Omeruo(on loan at Middlesbrough) but it seems Varane is the man Jose Mourinho prefers to take up Terry’s position.

Varane is a good defender, good in the air and comfortable with the ball on his feet. Don’t jump into tackle reason he is yet to receive any red card since making his debut for Madrid a characteristics that is rare among defenders of his age.

Kurt Zouma may have made some bright performances for Chelsea in the few games he has played so far but Varane stands ahead of him in terms of calmness, composure, reading of the game, experience and other attributes Mourinho may want from his defenders.

It wouldn’t be a surprise to see the special one use his connection and influence on the player to usurp Manchester United the opportunity to sign one of the best football young defender come January.