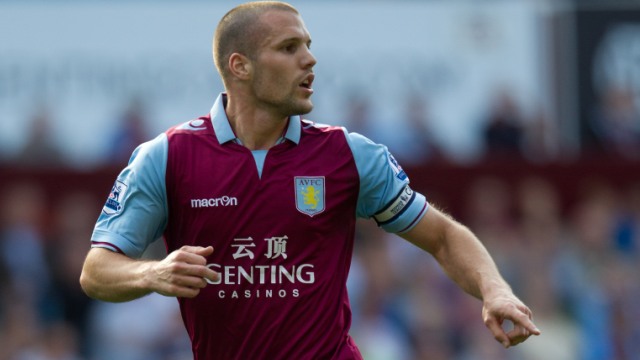 Arsenal could be in for Aston Villa and Dutch defender Ron Vlaar after the player’s agent indicated that his client was looking for a big move away from Villa Park.

The 29 year old is out of contract next summer, and so far despite holding several discussions with Paul Lambert, there is so far no indication that a deal is in the offing.

A January move was mooted for the towering centre half, but he was quick to dismiss the speculation. “I have nothing to say because there is nothing going on” he said about the speculations linking him away from Villa Park in January. About his future, “I have spoken to the gaffer a few times (about a new deal) but that is it so far.”

The Dutch defender had an injury this season last time around.

He was one of the best players at the World Cup in Brazil; he was at the heart of a Dutch defence that held their own enrooting to finishing in 3rd place at the show piece tournament in Brazil.

Following Arsenal’s current travails in defence, there were reports that Arsene Wenger could move for him in January. But going by his agent’s assertions any move for the defender would have to wait still the summer.

Arnold Oosterveer said: It is obvious that Ron, now is the moment to make a nice big move in his career. Ron is very ambitious.

“The situation is ideal for Ron right now. You can imagine that we are not in a hurry. I don’t want to react to the rumour that he will move to either Arsenal or Man United, but Ron is very ambitious.”

Besides being linked continuously to Arsenal, he has also been linked to Manchester United mainly because of Louis Van Gaal.

He was a key player in the Dutch team coached by the Manchester United manager at the World Cup in Brazil.

While Ron Vlaar has the experience of playing in the Premier League for a number of seasons, a down side to his time at Villa Park is his injury record.

He has spent more time injured since this season started, and that has been the theme with the 6ft 4in defender’s time at the West Midlands.

His injury problems re-aired it head again when he limped off in Holland’s international friendly with Mexico on Wednesday.

Arsenal have a chequered history of handling players that are injury prone, adding to that list would only do more harm than good to the club’s prospect.

Besides, Ron Vlaar is exactly at the same age with both Per Mertesacker and Laurent Koscielny, which could put paid to any move for him.

Arsene Wenger could be more receptive to a defender that is much younger to Mertesacker and Koscielny; a player that could serve as an understudy to both of the club’s first choice defensive pairing.

Conversely, there has been the odd mention of whether Ron Vlaar is a quality defender that Arsenal should look to sign.

Doubts remain because he is not an improvement on what the club currently has.

And his stellar World Cup in Brazil was a departure from his uncertain form with Aston Villa.

Which begs the question of what really is his actual ability as a defender?