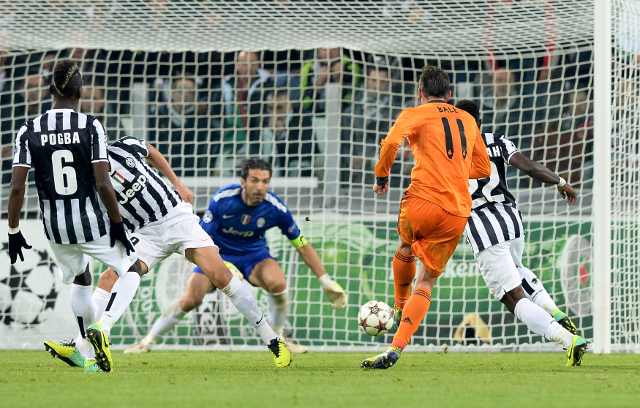 Real Madrid striker Gareth Bale was in a good mood last night following his goal, and more playing time for Los Blancos in their 2-2 draw with Juventus in Turin.

Since arriving at the Santiago Bernabéu the world’s most expensive player has been hit with a series of minor injuries but last night proved why Real Madrid put such a high price on his services.

The former Tottenham player was on the pitch for ninety minutes for the second leg of their Champions League clash with the Italian champs, and managed to score in the second half taking his tally to four goals now scored with his new team.

“It’s always nice to get a goal,” he told Sky Sports.

“It’s obviously a difficult place to come, in Juventus it’s such a hostile atmosphere. I think a point isn’t a bad result.

“Obviously we came here to win, but we’ll take it and move on to the next game and try to qualify as quickly as possible.

“I’ve come back and played three games in a week. I’m still building my fitness up.

“I’m not sure why I was taken off, but it’s obviously the manager’s decision and I’ve got to do what is best for the team.”

Real Madrid’s other big name striker Cristiano Ronaldo was also on form scoring their other goal, and was delighted to have helped his side reach the knockout stages of the competition saying: “We knew it would be a difficult game, especially away against Juventus.

“We knew that they would put 100 per cent in on the pitch because they need points. But one point for us is good. We are already qualified and we are very happy for that.

“Bale helped the team a lot. He is a fantastic player and showed that he is a very good player. We are happy that we have him here with us.”