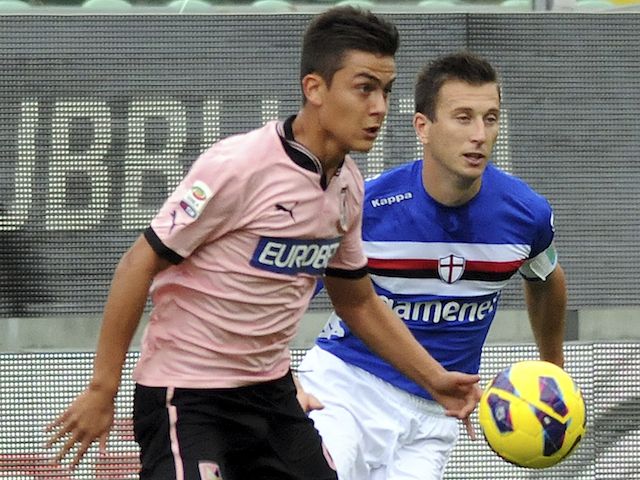 According to reports, Arsenal is set to move for Palermo striker Paulo Dybala. The 20 year old Argentine striker has been dubbed the new Aguero in Italy.

Arsenal is expected to face competition from several Premier League clubs for the player’s signature. South Coast club, Southampton is another club that is interested in signing the Palermo striker.

Paolo Dybala has scored four goals in 12 Serie A matches this season, for a Palermo side that regained promotion to the top division of Italian football this season.

The 20 year old built up a reputation as a lethal goal scoring forward during his time in the Argentine league with Instituto Club. He broke several goals scoring record previously held by Argentine legend Mario Kempes.

He played 40 games for the Argentine club, and ended up with 17 goals, one of his goals saw him become the youngest goal scorer in the league which saw him break the record of Mario Kempes.

As a result he also became the youngest player to play in 38 consecutive games, as well as the youngest to score two hat tricks, breaking a record previously held by Mario Kempes.

He scored in six straight games during his time in Argentine league, breaking the past record of four games.

When he was signed by Palermo in 2012, the president Maurizio Zamparini moved to say that they had signed the new Sergio Aguero.

The believability and otherwise of this story lies in the current attacking players that Arsenal have. While most Arsenal fans would give anything to get the real Sergio Aguero from Manchester City, the one called the new Aguero because of his record in the Argentine league would not excite many fans of the club.

The balance of the present Arsenal team is tilt towards the attack to the extent that, several players have had to be left out from the squad in recent weeks, while others have had just modicum appearances this season.

This picture only serve to show that the stories linking Paulo Dybala to Arsenal are purely made up media storms brewing out of nothing.

Besides, the lack of balance mentioned earlier has angered some followers of the club, there seem to be enough cover in attack when there is an injury, but the same cannot be said of the situation in defence and in central midfield.

It is such situation that has made a story as Paulo Dybala as just one of those that falls on the scale of improbable, for reasons that there are already enough attacking players in the club, and for the balance of the team to be set right the dearth of a quality backbone in central defence and in central midfield has to be addressed, and that would not be achieved through a move for another attacking player.