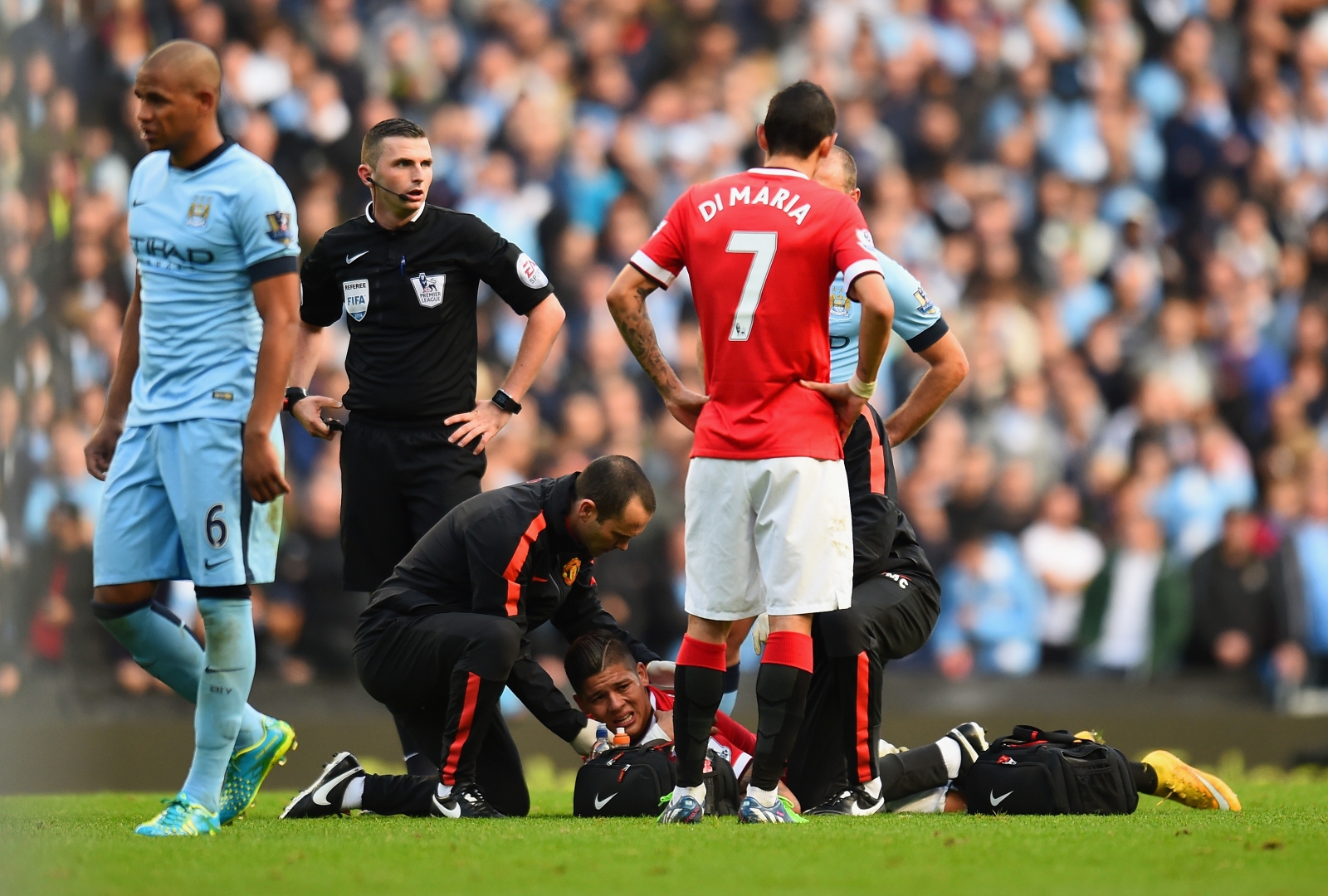 It was in an act of sheer heroism that Marcos Rojo, who by a long haul is Manchester United’s most reliable defender his season lunged himself at an oncoming Sergio Aguero.

The Red Devils were already one man down and obviously couldn’t afford to concede to their city rivals who were constantly exploiting the personnel advantage they had to breathe down the visitor’s neck.

As a result of the act, Rojo suffered a dislocation to his shoulder and in fact needed a pipe of oxygen as he was stretchered off.

Although there was panic written all over the coaching staff of the club, many still believed that Rojo, who was as of then the last central-defensive option available to Louis van Gaal after Chris Smalling’s indiscretion got him expelled, will just need a few days rest and then resume training but that was not to be as the Argentine was absent on the team list that secured a victory against Crystal Palace.

The manager had hinted on the Friday preceding the last match that Rojo’s dislocation did not require a surgery but that the defender could be out of action for about 6 weeks.

It is however understood that although Marcos Rojo tore his acromioclavicular ligament, he is battling to be fit in time for the clash against Liverpool on the 14th December, 2014.

This means that Louis van Gaal will have to design a dynamic backline that can suffice in the absence of the favourite defenders against Arsenal, Hull City, Stoke City and Southampton.

At the moment, the Red Devils defence is one of the worst hit by injury in the English Premier League with Rafael, Phil Jones and Jonny Evans all side-lined due to various injuries.

It was tough when the news of Rafael’s injury hit the air because the fans knew that the team will miss the Brazilian’s bustling runs down the flanks and although Antonio Valencia has been doing his best, many pundits believed that the Red Devils could still have fared quite better if they had the services of their right full-back whose muscle injury ensured that he missed both the Manchester derby and Crystal Palace clash.

Another of the defenders, Phil Jones who was recently reported to be recuperating from his injuries suddenly developed shin splints.

Jonny Evans is probably the most experienced of the defenders but has missed the club’s last six games after hobbling off during the devastating 5-3 defeat to Leicester City at the King Power Stadium on September 21.

He was later diagnosed of a terrible ankle injury.

Against Crystal Palace last weekend, the manager tweaked his defence about three times before the match ended and in the closing stages, it was Daley Blind and Michael Carrick who played in the central defence.

Manager, Louis van Gaal is surprisingly optimistic and believes that the international break will give the injured players the much needed space to fully recover.

The manager said: ‘Thankfully, the international break will give a lot of our players enough time to recover for the busy December period we have ahead of us.’