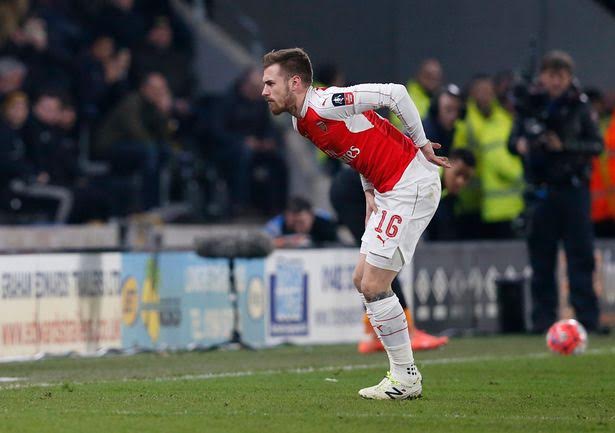 Arsenal manager Arsene Wenger was left “shocked “as one player after another picked up knocks during the Gunners impressive FA Cup 0-4 away win against Hull City.

Despite the margin of the win it did not come without a price Aaron Ramsey, Gabriel, Per Mertesacker and Nacho Monreal all picked up injuries ahead of one of the clubs toughest weeks of the season.

Wenger looked on in horror as the four players joined the Gunners casualty list knowing that he next faced Watford in the Cup quarter-finals, Barcelona in the second-leg of a Champions League last-16 tie and then a trip to Everton for a match they need to win in order to keep their Premier League title dream alive.

Of the injuries the most serious appears to be to Welshman Aaron Ramsey, who limped off the pitch with a thigh injury just 16 minutes after having come on as a substitute.

Brazilian defender Gabriel had to leave the proceedings with a hamstring injury while fellow centre-back Per Mertesacker had a cut head and was complaining of feeling dizzy.

Following the match Wenger had this to say about his battered team: “I’m a bit shocked – we lost our two centre-backs in the game and after we lost Aaron Ramsey.

“Mertesacker has a cut on his eye and a bit of concussion but he should be fine and Gabriel looks alright.

“Ramsey I’m a bit more concerned because it’s a muscular thigh injury. Apart from that we have played well.”

Arsenal will now hope to recover quickly and get on with the business at hand following the impressive win which now has the Emirates faithful for the time being at least not asking for Wenger to resign.