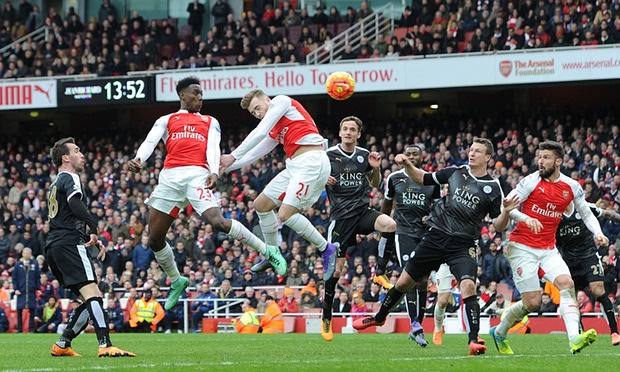 Arsenal hero Danny Welbeck could not have dreamed about having such a spectacular way to return to the pitch following yesterday’s stoppage time winner against Leicester City at the Emirates.

The England international is along with Bundesliga hero Javier Hernandez a player Manchester United manager Louis van Gaal decided was not good enough to play in his team at Old Trafford so was sold to Arsenal soon after van Gaal was appointed Red Devils manager.

The England striker had a good first season with the Gunner before becoming injured and missing the current campaign.

That was of course until yesterday when Arsenal manager Arsene Wenger desperately needing a goal to keep his teams title aspirations on track decided to send Welbeck into the fray in the 83rd minute in the hope that the former Manchester United striker could score.

And score he did with a brilliant header that now has Arsenal fans claiming he has won the title for them.

While watching the match, former United defender Rio Ferdinand could not stop himself from tweeting about Welbeck’s goal saying: ‘Welbeck……. I ain’t even going to start….. ‘Happy for Welbz but how Man United let him go.’