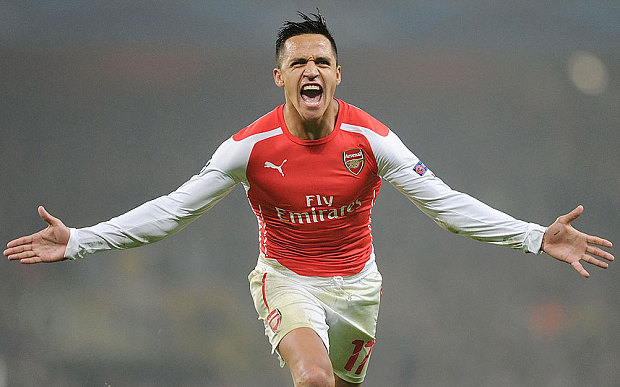 In what proved to be a piece of great business last summer not a single person can say that Arsenal were wrong to have signed Alexis Sanchez from Barcelona as the Chilean has been sensational all season scoring 22 goals in all competitions.

When talking about the transfer today Wenger explained how he went about it saying: ‘What you want more than to [sign a player early] is to do it right.

‘Sometimes an opportunity comes up early. Last year we signed Sanchez early in the window. You take the opportunity when it comes up.

‘Sometimes the opportunity is decided by the other club. Sanchez became available because Barcelona signed Luis Suarez.

‘You always have to be on alert and fix your target, do it when it’s possible but you aren’t the only ones who can decide.’

Meanwhile Liverpool yet again lost out on signing Dutch winger Memphis Depay who has now hitched his wagon to Manchester United, and if that was not bad enough Liverpool manager Brendan Rodgers made a fool of himself saying that the Reds were not interested in the 21-year-old winger when it was obvious to everyone that they were by meeting with him and his agent.

Rodgers said “Unfortunately for you guys it’s something we was never interested in. Depay is a young talented player but we already have four wingers at the club – Raheem Sterling, Jordan Ibe, Adam Lallana and Lazar Marković. We have other priorities we are looking at over the course of the summer.”

Perhaps Liverpool should find a better way to encourage players to come to Anfield, as what they are doing now is only managing to sign players the top four clubs don’t want.