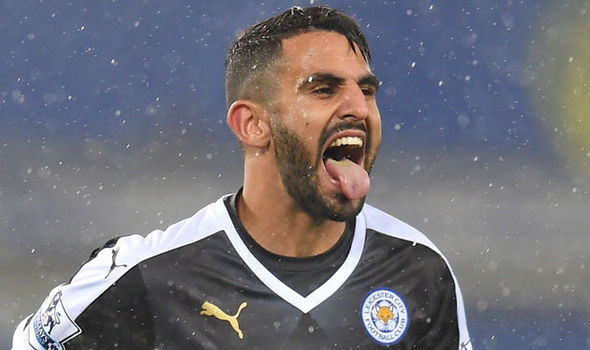 When you’re a player like Riyad Mahrez, your name is always linked with transfer speculations. When you’re Riyad Mahrez and you become the PFA Player of the Year, it’s hard to not be courted by the biggest clubs in the world.

The Algerian who has had a sensational 2015/2016 season by scoring 17 goals and garnering 11 assists is being touted to leave Leicester at the end of the season with clubs like Arsenal strongly linked to the player.

But it has been unsure whether he will stay (because of Leicester’s Champions League qualification) or leave (to play in a much bigger club). And his agent has come out to clear the air on the issue.

He said, ‘When you have been playing the way Riyad has this season it is bound to attract attention,’ he told the Guardian. ‘He is very happy with Leicester and of course it has been a fantastic season. They play in the Champions League next year as well so he would be happy to stay.

‘But at his age if the opportunity comes to play for a big team then we would have to think about it. I’d say it’s 50/50 at the moment whether he stays or goes’.

With this being said, it’s obvious anything can happen in the summer transfer window. Although if Mahrez were to leave Leicester, he has already ruled out a move to PSG or any other club stating that he’ll love to move to another Premier League club.

With the player himself confirming he will like to remain in the Premier League, Arsenal have a strong chance of signing the Algerian this summer.

If Wenger is very interested, there is a very good chance that Mahrez will be a Gunner by the time the 2016/2017 season starts. Mahrez surely know Arsenal is head and shoulder above Leicester City and knows if he is to play regular Champions League football, he has a good chance of doing that at Arsenal than Leicester City whose brilliant season is likely to be proved to be a fluke when the big guns finally get their acts together next season.